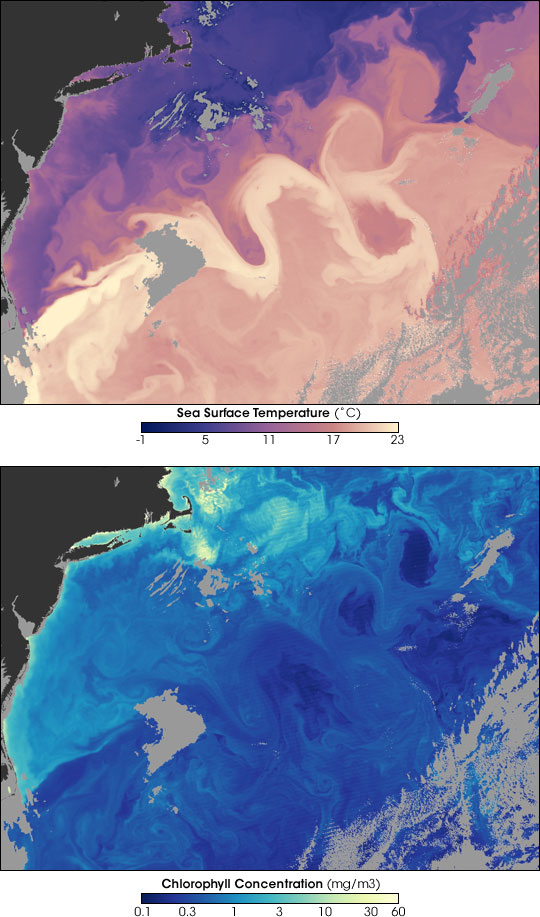 The Gulf Stream Current is one of the strongest ocean currents on Earth. This river of water that ferries heat from the tropics far into the North Atlantic pulls away from the coast of the U.S. Southeast around Cape Hatteras, North Carolina. There the current widens and heads northeastward. In this region, the current begins to meander more, forming curves and loops with swirling eddies on both the colder, northwestern side of the stream and the warmer, southeastern side.

These images show the sea surface temperature (top) and chlorophyll concentration (bottom) of the Gulf Stream on April 18, 2005. In the sea surface temperature image, the warm waters (yellow) of the Gulf Stream snake from bottom left to top right, showing several deep bends in the path. In fact, the northernmost of the two deep bends actually loops back on itself, creating a closed-off eddy. On the northern side of the current, cold waters (blue) dip southward into the Gulf Stream’s warmth. Gray areas in both images indicate clouds.

Often chlorophyll, which indicates the presence of marine plant life, is higher (yellow) along boundaries between cool and warm waters, where currents are mixing up nutrient-rich water from deep in the ocean. Many of the temperature boundaries along the loops in the Gulf Stream are mirrored in the chlorophyll image with a stripe of lighter blue or yellow, indicating elevated chlorophyll.

These images were made from data collected by the Moderate Resolution Imaging Spectroradiometer (MODIS) on NASA’s Aqua satellite.