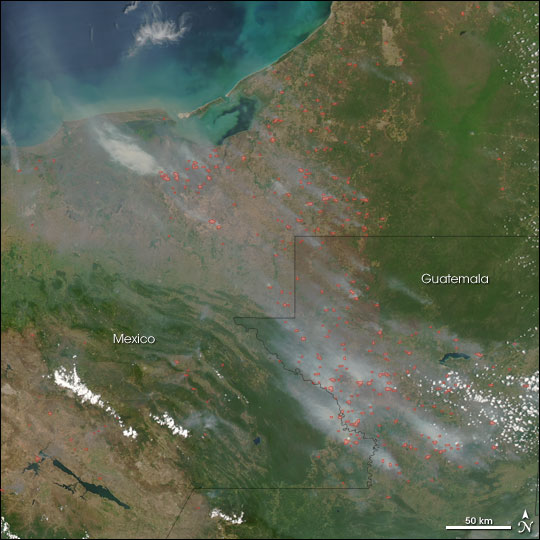 On April 10, 2005, scores of fires in southern Mexico and northern Guatemala were billowing smoke that spread northward over the Gulf of Mexico. This image of the region was captured by the Moderate Resolution Imaging Spectroradiometer (MODIS) on NASA’s Aqua satellite. Active fire locations have been marked with red dots. A high concentration of fires runs in a rough line between northwestern Guatemala and the Laguna de Terminos, on the southern coast of Mexico’s Campeche state. Gray smoke spreads northward over the Gulf.

According to Victor Hugo Ramos, Coordinator for the Guatemalan Center for Monitoring and Evaluation [a joint effort of the Consejo Nacional de Areas Protegidas (CONAP) and the Wildlife Conservation Society], the area is suffering from a severe drought, with rainfall perhaps as much as 50 percent below average. Although agricultural fires are common this time of year as people clear and prepare land for the upcoming growing season, the drought causes many to escape control and spread into nearby forests and protected areas.

This problem is particularly severe in northwestern Guatemala, for example, in the Laguna del Tigre National Park. The area has suffered considerable damage over the last few years. Both 1998 and 2003 turned out to be years of devastating fire for the area’s remaining tropical forests. According to Ramos, 2005 seems to be poised to become the new “worst year on record” before adequate rains arrive in mid to late May.

Fires across southern Mexico and northern Central America spread smoke across the Gulf of Mexico’s Campeche Bay on April 4, 2009.