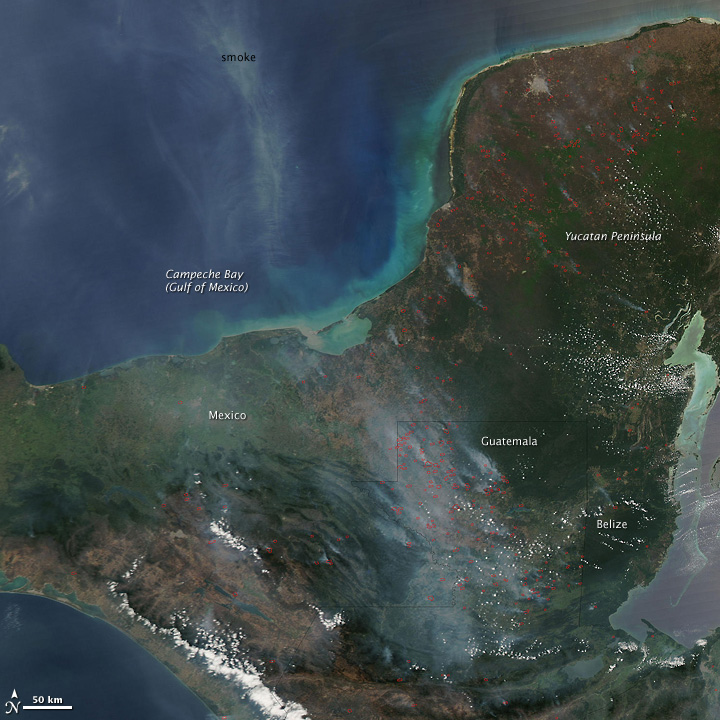 Scores of fires were burning in southern Mexico, on the Yucatan Peninsula, and in northern Guatemala and northern Honduras (pictured in large image) in early April 2009. This image from the Moderate Resolution Imaging Spectroradiometer (MODIS) on NASA’s Aqua satellite shows the fires (outlined in red) on April 4. Smoke spreads northward over Campeche Bay in the Gulf of Mexico.

In southern Mexico and northern Central America, as in many parts of the developing world, tropical forests are under intense pressure as people clear land for agriculture and logging. Each year during the dry season (November to May) land managers and conservationists must be increasingly vigilant about protecting the area’s national parks and preserves from accidental and intentional (arson) fires. Fires that farmers use to clear their land in anticipation of spring planting sometimes get out of control and invade natural areas; people also set fires illegally because degraded forests are easier for loggers and miners to exploit.

The MODIS sensors on NASA’s Terra and Aqua satellites provide fire detection data in near-real-time, which geographers have incorporated into a fire alert system. Land managers and conservation groups in Central America receive alerts on their mobile phones or via email when fires are detected in or near parks or other protected areas. To learn more, read the Earth Observatory feature story Fire Alerts Go Global.

Fires across southern Mexico and northern Central America spread smoke across the Gulf of Mexico’s Campeche Bay on April 4, 2009.