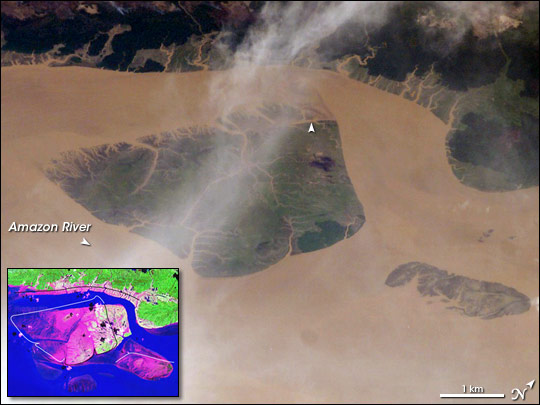 Over a period of approximately four years a major island near the mouth of the Amazon River has been dramatically modified as the arms of the river have shifted. In the image above, an oblique image, captured by an astronaut with a handheld camera in January 2005 (base image), is contrasted with a false-color Landsat Enhanced Thematic Mapper plus (ETM+) image from 2000 (inset). In the Landsat inset, green indicates rainforest, pinks and mauves are low-growing, colonizing vegetation on tidally inundated areas, and the Amazon River is blue.

The island is about 5 kilometers long and is located near 0.3° N 50.2° W). Between 2000 and 2005 the channel on the west side of the island has shifted to the northwest by eroding ~200 meters of the mainland shoreline and accreting (depositing) sediment on the west side of the island, broadly maintaining the width of the channel. White lines around the island in the inset image indicate the modern shorelines captured in the astronaut photograph. In the handheld photograph, the island shoreline of 2000 prominently demarcates older vegetated from new, not-yet-vegetated land surfaces (top arrow).

By contrast, the northern channel (to the right of the island) has significantly widened, eroding almost 1 kilometer of the northern end of the island, as well as narrowing a smaller island downstream (lower right). A more important but subtler effect has been the accumulation of sediment on the upstream (left-hand) two-thirds of the island, accompanied by the establishment of permanent vegetation (dark green).

Vegetation appears to anchor small streams in place, but discharge in major arms of the Amazon overcomes the cohesive power of vegetation so that large channels can be comparatively mobile. Other islands in the Amazon mouth are also known to have moved by hundreds of meters per year due to the processes of erosion and deposition.

Astronaut photograph ISS010-E-13029 was acquired January 13, 2005 with a Kodak 760C digital camera with an 400 mm lens, and is provided by the ISS Crew Earth Observations experiment and the Image Science & Analysis Group, Johnson Space Center. The International Space Station Program supports the laboratory to help astronauts take pictures of Earth that will be of the greatest value to scientists and the public, and to make those images freely available on the Internet. Additional images taken by astronauts and cosmonauts can be viewed at the NASA/JSC Gateway to Astronaut Photography of Earth.