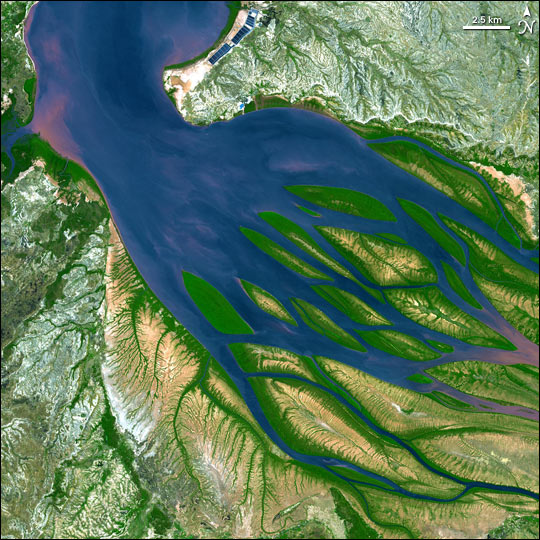 On the northwestern coast of Madagascar, the salty waters of the Mozambique Channel penetrate inland to join with the freshwater outflow of the Betsiboka River, forming Bombetoka Bay. Numerous islands and sandbars have formed in the estuary from the large amount of sediment carried in by the Betsiboka River and have been shaped by the flow of the river and the push and pull of tides.

This image from the Advanced Spaceborne Thermal Emission and Reflection Radiometer (ASTER) on NASA’s Terra satellite shows Bombetoka Bay just upstream of where it opens up into the Mozambique Channel, which separates Madagascar from Africa to the west. In the image, water is sapphire and tinged with pink where sediment is particularly thick. Dense vegetation is deep green.

Along coastlines and on the islands, the vegetation is predominantly mangrove forests. In fact, Bombetoka Bay is home to some of Madagascar’s largest remaining communities of mangroves, which provide shelter for diverse mollusk and crustacean communities, as well as habitat for sea turtles, birds, and dugongs. Along the northwest coast of Madagascar, mangroves and coral reefs partner up to create dynamic, diverse coastal ecosystems. The mangrove forests capture river-borne sediment that would smother coastal reefs, while reefs buffer the mangroves from pounding surf.

The part of the bay shown in the scene is just upriver from the important Malagasy (the adjective used to describe things and people from Madagascar) port city of Mahajanga. Near water, shrimp and rice farming are common—the rectangular blue areas near the top center edge may be shrimp pens—while coffee plantations abound in the surrounding terrain.