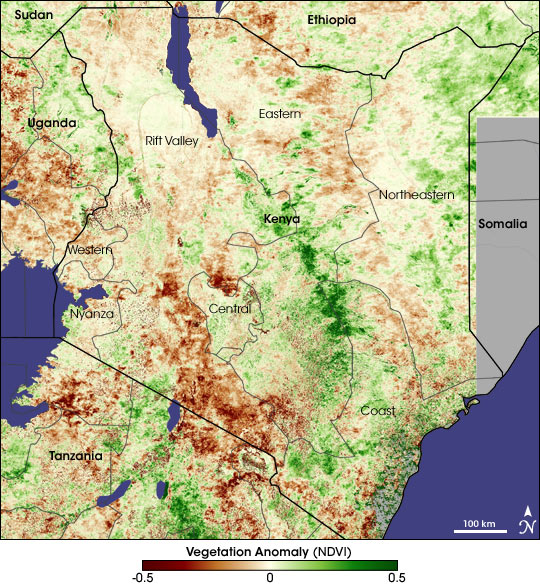 Drought has been looming over Kenya for several years, leaving many regions of the country parched and hungry. Now, as the 2004/2005 harvest draws to a close, the cereal deficit has grown to 300,000 metric tons, which means that up to 2.7 million people will need food aid this season--an unusually high number for Kenya. The second maize crop, scheduled to be harvested in March, is predicted to be 20 percent below average because of a lack of rain. The most recent shortages stem from a lack of rainfall during the short rainy season, which normally runs from November to January. Though some parts of Kenya received adequate rain, crop-growing regions in the Eastern, Central, and Coast Provinces received far-below-average rainfall. In Central Province alone, about 400,000 people are facing famine, according to government estimates.

The impact of drought on the crops can be seen in this image, which shows the Normalized Difference Vegetation Index (NDVI) anomaly for Kenya as measured by the Moderate Resolution Imaging Spectroradiometer (MODIS) during the first two weeks of January. NDVI is a measure of vegetation density and health. The anomaly image compares current conditions to average conditions in 2001, 2002, 2003, and 2004 during the first two weeks of January. Between January 1 and January 16, 2005, brown clusters in the Coast and Eastern provinces show patterns of dryness where vegetation is less dense than it has been in the past. More pronounced drought areas surround Central Province. Grey pixels indicate regions where data were not available. An arch of green through the center of the country reveals where rainfall was plentiful and vegetation is thriving.