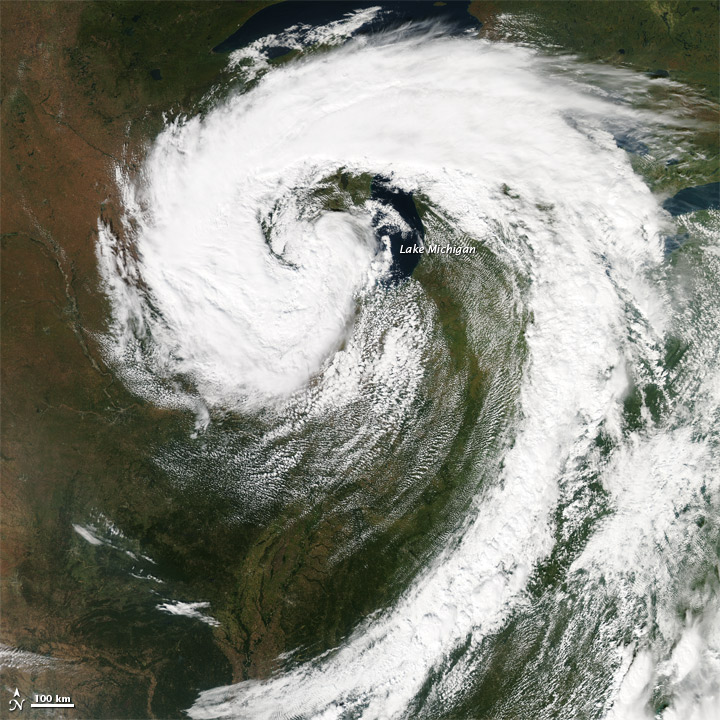 The Capital Weather Gang at The Washington Post reported that the storm was at its most mature stage on September 26. Sporting a comma shape spanning hundreds of kilometers, the storm was comprised of a combination of warm, moist air (clouds) and cold, dry air (cloud-free areas).

Mid-latitude cyclones drive most of the stormy weather in the continental United States. Development of these cyclones often involves a warm front from the south meeting a cold front from the north. In the Northern Hemisphere, cyclones move in a counterclockwise direction. (In the Southern Hemisphere, cyclones are clockwise.) The bands of cold and warm air wrap around a center of low pressure, and air rising near the center spurs the development clouds and precipitation.

Justin Berk, a meteorologist based in Baltimore, explains that in this region, “cold air eventually wins out and wraps completely around a storm. This is called a ‘cold core’ storm and has cut itself off from the main flow of the jet stream.” This, says Berk, is why the September 26 storm appears stalled near Chicago.

An animation of the storm from the Geostationary Operational Environmental Satellites (GOES) shows the storm’s progress from September 25 to September 27.