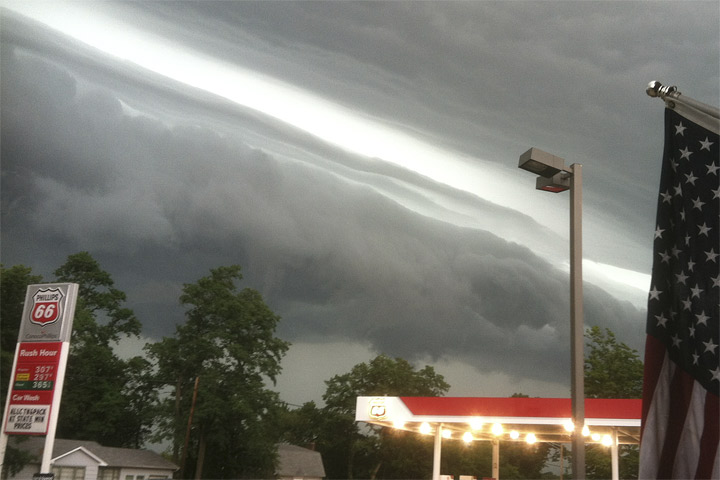 On June 29, 2012, a windstorm started in northwestern Indiana, and traveled roughly 600 miles (1,000 kilometers) eastward to the Atlantic Ocean. Embarking on a roughly 10-hour journey, the fast-moving storm toppled trees, downed power lines and left more than a million residents without power in the District of Columbia alone.

The storm was what meteorologists call a derecho. Deriving its name from the Spanish term for “straight ahead,” derecho storms generally blow in one direction. They do not swirl like tornadoes, but they can cause tornado-style damage. The U.S. National Oceanic and Atmospheric Administration (NOAA) reported that the wind gusts in the June 29 derecho rivaled those of an EF-1 tornado.

This photo, also available from the NOAA storm summary, was taken in LaPorte, Indiana, on the afternoon of June 29. It shows a shelf cloud on the leading edge of the derecho. These long, flat clouds are often associated with thunderstorms, and the massive windstorm that swept over the eastern United States was also associated with thunderstorms—a long line of them stretching for hundreds of miles.

The June 29 derecho occurred along the boundary of two air masses. In the north, the air was stable and dry. In the south, the air was unstable and moist. And hot. The Capital Weather Gang reported that, before the derecho began, areas affected by the southern air mass were facing record-high temperatures—109 degrees Fahrenheit (43 degrees Celsius) in Nashville, Tennessee, and Columbia, South Carolina; and 104 degrees (40 degrees Celsius) in Washington, DC. This hot, humid air provided fuel for the windstorm, which pulled the air skyward, then returned it in violent downdrafts.

Derechos have occurred before, and were actually given their name in the late nineteenth century. They occur most often in the Midwestern and Great Lakes regions of the United States, between May and July. To qualify as a derecho, a storm must cause damage over 240 miles (400 kilometers) and pack wind gusts of at least 58 miles (93 kilometers) per hour. The June 29 derecho damage extended over a much greater length, and the storm brought wind gusts of more than 90 miles (145 kilometers) per hour. The June 29 storm did not just qualify as a derecho. It was, according to the Capital Weather Gang, “one of the most destructive complexes of thunderstorms in memory.” 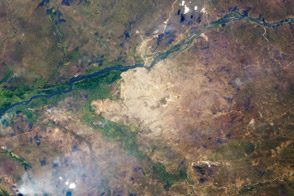