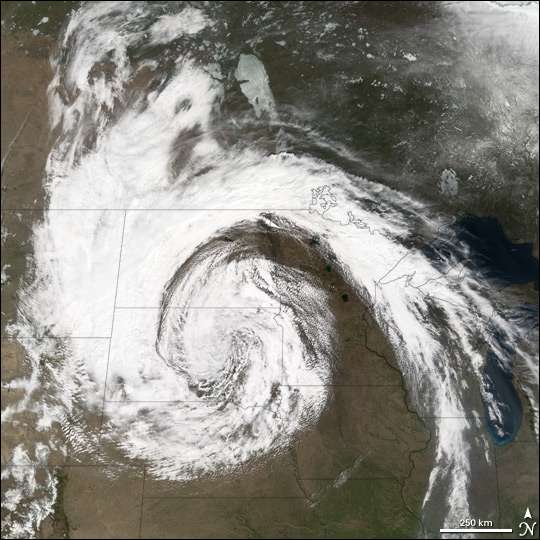 Although most of the United States enjoyed clear skies on April 19, 2006, North and South Dakota and sections of Montana and Wyoming were hammered with a late-spring snow storm. The storm dumped up to two feet (60 centimeters) of snow on the northwestern Plains, knocked out power in thousands of homes and businesses, and closed highways, reported the Associated Press. The storm was also blamed for four deaths, most of which occurred in a single accident on an ice-covered road.

The Moderate Resolution Imaging Spectroradiometer (MODIS) on NASA’s Terra satellite captured this image of the storm on the morning of April 19. Clouds swirl counter-clockwise around a low-pressure system: a pattern that is virtually synonymous with winds and precipitation. The clouds take this shape when cold air from the north meets warm air coming from the south. The warm air rises over the cold air and cools, forming towering clouds, the source of the rain or snow.

The rising air leaves an “empty” space—a region of low air pressure—near the Earth’s surface. Air flows in to “fill” the low-pressure area. Because of the spin of the Earth on its axis, the air circles the low-pressure region in a counter-clockwise direction (in the Northern Hemisphere), resulting in the swirl seen here. This comma-shaped cloud formation is the classic satellite evidence of this type of storm, which is known to meteorologists as a mid-latitude cyclone. 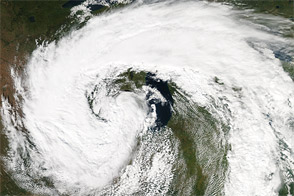