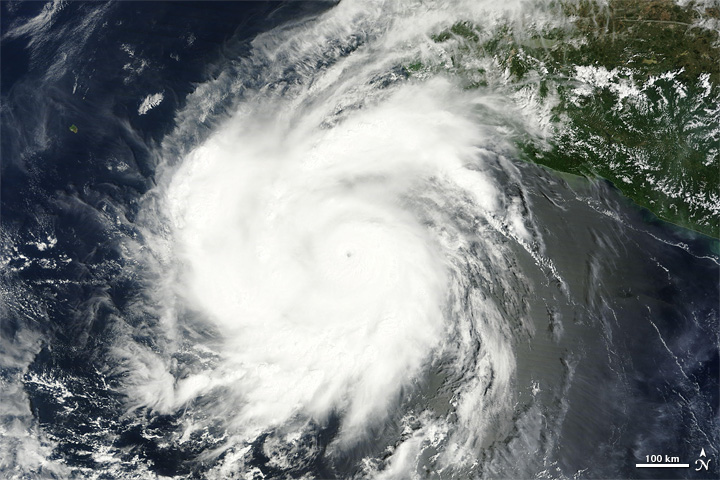 Hilary was a Category 4 hurricane on September 24, 2011, according to the U.S. National Hurricane Center (NHC). At 8:00 a.m. Pacific Daylight Time (PDT) on that date, the NHC reported that the storm had maximum sustained winds of 140 miles (220 kilometers) per hour, and was located roughly 210 miles (335 kilometers) southwest of Manzanillo, Mexico.

The Moderate Resolution Imaging Spectroradiometer (MODIS) on NASA’s Terra satellite captured this natural-color image at 10:40 a.m. PDT on September 24. Although relatively compact, the storm has the distinct eye and spiral shape characteristic of strong storms. The storm lies west of Mexico and is headed farther out to sea.

At 8:00 a.m. PDT on September 25, the NHC reported that Hilary was now a Category 3 hurricane, but remained a dangerous storm, with maximum sustained winds of 125 miles (205 kilometers) per hour. Located about 395 miles (640 kilometers) south of the southern tip of Baja California, Hilary had the potential to create life-threatening surf and rip current conditions.