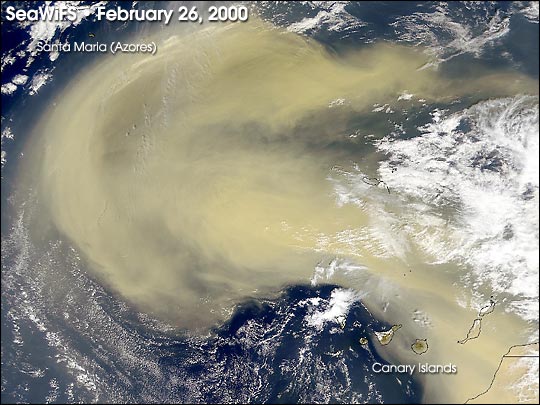 A massive sandstorm blowing off the northwest African desert has blanketed hundreds of thousands of square miles of the eastern Atlantic Ocean with a dense cloud of Saharan sand. The massive nature of this particular storm was first seen in this SeaWiFS image acquired February 26, 2000 when it reached over 1000 miles into the Atlantic.

These storms and the rising warm air can lift dust 15,000 feet or so above the African deserts and then out across the Atlantic, many times reaching as far as the Caribbean where they often require the local weather services to issue air pollution alerts as was recently the case in San Juan, Puerto Rico.