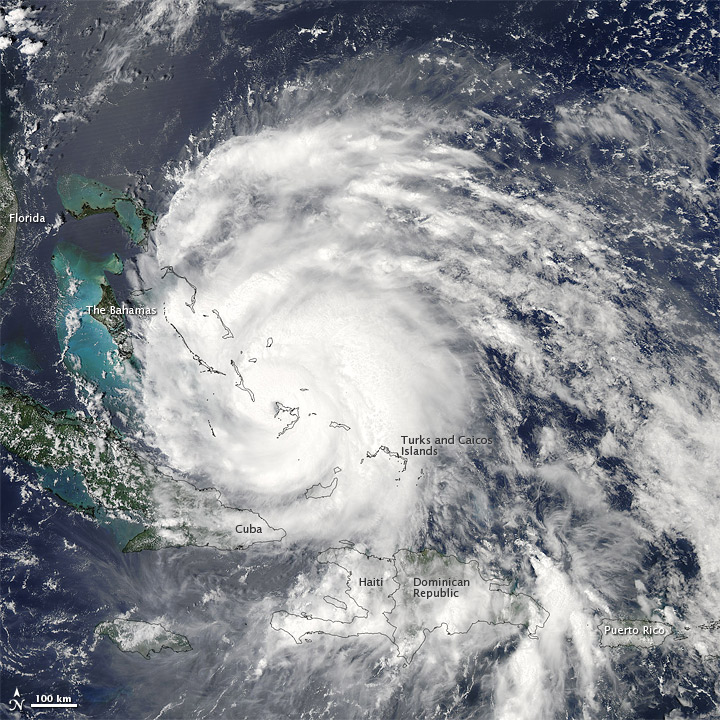 Hurricane Irene strengthened on its path toward the continental United States in late August 2011. Residents of the U.S. East Coast braced for the first hurricane to seriously threaten the country in three years, Voice of America reported.

At 2:00 p.m. Eastern Daylight Time on August 24, about the time MODIS took this picture, the U.S. National Hurricane Center (NHC) reported that Irene was a Category 3 hurricane with maximum sustained winds of 120 miles (195 kilometers) per hour.

As of 5:00 a.m. EDT on August 25, Irene was moving toward the northwest at about 12 miles (19 kilometers) per hour. The storm was expected to turn toward the north-northwest the same day, then toward the north early the following day. The NHC five-day storm track showed Irene moving northward along the U.S. East Coast.

As U.S. residents braced for Irene’s arrival, residents of Caribbean Islands cleaned up from the destructive storm. The Christian Science Monitor reported that flooding and mudslides had forced the Dominican Republic to evacuate nearly 38,000 people, and a U.S.-based analysis firm estimated potential damage in the Caribbean at up to $3.1 billion.