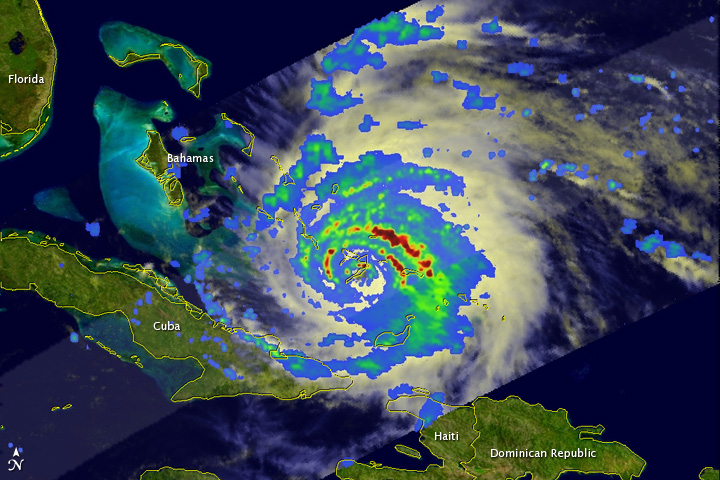 By 8 a.m. Eastern Daylight Time on August 24, 2011, Hurricane Irene had become a Category 3 storm with sustained winds of 100 knots (about 115 miles per hour). The Tropical Rainfall Measuring Mission (TRMM) satellite took this image of the storm at 11:42 a.m. EDT, as Irene was passing over Crooked Island in the southeast Bahamas.

Although somewhat obscured by the island, Irene did have a visible eye. Unlike the previous image from TRMM, the rain bands surrounding the center are now very tightly wound and are more evenly distributed about the center. These are characteristic of a larger, much more intense circulation. It indicates that strong winds are quickly pulling bands of rain into a circle around the center of the storm.

At the time this image was taken, Irene’s maximum sustained winds were still 100 knots (about 115 mph), but the storm’s central pressures were continuing to fall, an indication the storm was in the process of intensifying. Just over two hours later, Irene’s maximum sustained winds had risen to 120 mph. Irene is expected to pass through the central Bahamas and could become a Category 4 storm before threatening the U.S. East Coast.

This view of rain inside Hurricane Irene reveals a strong, mature storm with circular bands of heavy rain on August 24, 2011. 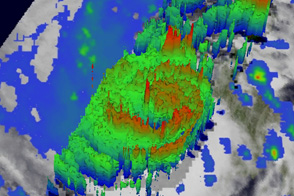 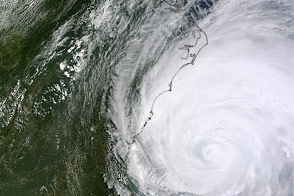 Hurricane Irene swirls off the East Coast of the United States in this image from August 26, 2011.