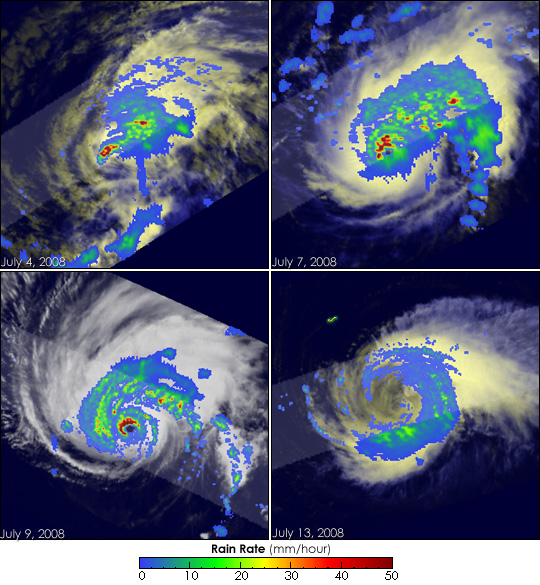 This series of images chronicles the development and decay of the first hurricane of the 2008 Atlantic hurricane season, Hurricane Bertha. The images were taken by the Tropical Rainfall Measuring Mission (TRMM) satellite, which uses microwave and radar sensors to see both the swirling clouds and bands of rain that define the structure of the storm.

TRMM captured the first image, top left, on July 4, a day after Bertha had become a tropical storm. As shown in the large image, which covers a broader area, the storm was immediately west of the Canary Islands off the coast of West Africa. The cluster of thunderstorms had just started to take a circular shape. While the spots of red indicate there were regions of heavy rain, little organization was evident.

Bertha strengthened as it slowly moved west over the warm waters of the Atlantic Ocean. When TRMM captured the next image on July 7 at 17:03 UTC (1:03 p.m. EDT), top right, the storm was approaching its maximum intensity. Between July 7 and July 8, Bertha grew from a tropical storm with winds of 100 kilometers per hour (63 miles per hour or 55 knots) to a major hurricane (Category 3 storm) with winds of 195 km/hr (120 mph or 105 knots). At the time of the image, Bertha was intensifying from a Category 1 to a Category 3 hurricane, according to the National Hurricane Center. Not surprisingly, the storm was much more organized on July 7 than it was on July 4. A circular band of dark red defined the northern edge of the eyewall, where rain and winds were most intense. Other bands of heavy rain (yellow and green) circled the center of the storm.

The eye was larger and cloud-free when TRMM captured its next image of the storm on July 9, lower left. The eyewall was crisply defined in an arc of dark red, indicating extremely intense rain. The heavy rain in the eyewall is a good indication that a lot of heat was being released into the storm’s core, driving its circulation. This circulation was evident in the surrounding rain field, which curves around the storm in distinctive bands. When TRMM captured this image at 23:20 UTC (7:20 p.m. EDT) on July 9th, Bertha had regained Category 2 intensity with winds estimated at 170 km/hr (104 mph or 90 knots) by the National Hurricane Center.

The final image in the series was taken on July 13 at 16:20 UTC (12:20 p.m. EDT). At this stage, the storm was almost completely devoid of rain near its center. Instead, only the remains of the large outer eyewall (as evidenced by the ring of light to moderate rain shown in blue and green, respectively), wrapped around the eastern side of the storm. This is typically where the strongest winds reside, which at this time were estimated at 100 km/hr (63 mph or 55 knots) by the National Hurricane Center.

As Bertha continued to drift towards Bermuda, it began to take a more northerly track. The center passed east of the island on July 14, bringing tropical-storm-force winds that knocked out power. The storm also produced dangerous rip currents along the East Coast of the United States, likely contributing to the drowning of at least one person along the New Jersey shore, said the Associated Press. As of July 15, Bertha was expected to strengthen slightly as it pulled away from Bermuda off to the north-northeast.

Images produced by Hal Pierce and caption by Steve Lang and Holli Riebeek.