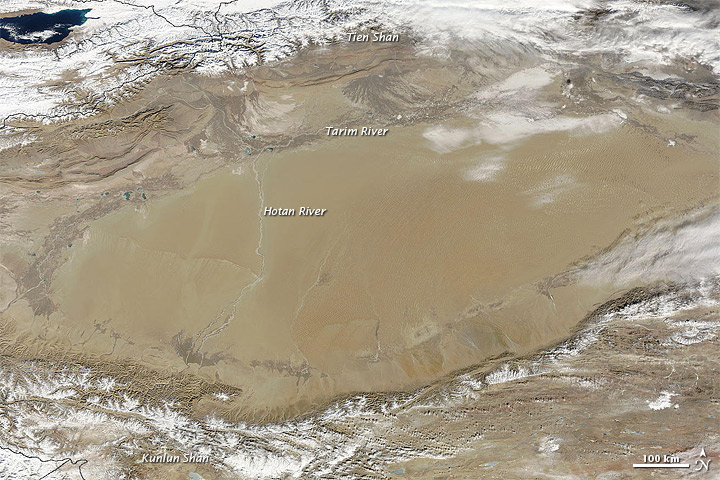 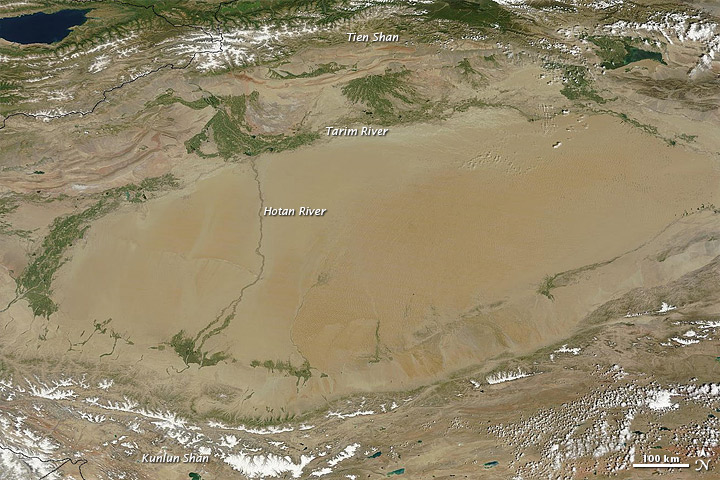 In westernmost China lies the Tarim Basin, home to the Taklimakan Desert—the biggest, hottest, driest desert in China. Sand dunes cover about 85 percent of the Taklimakan, often feeding massive dust storms. Isolated from the Asian monsoon and from Arctic storms, the central basin receives less than 10 millimeters (0.4 inches) of precipitation per year. In such a parched environment, plants are rare, and yet they exist. In the summertime, they appear to thrive.

Runoff from the Tien Shan mountains and the Kunlun Shan mountains feed rivers, which in turn support vegetation. The Moderate Resolution Imaging Spectroradiometer (MODIS) on NASA’s Terra satellite captured these images of the Tarim Basin on January 26, 2011 (top), and August 6, 2011 (bottom).

In the January image, snow blankets the mountain peaks north and south of the Tarim Basin, and the basin itself appears in shades of brown. In the August image, snow has receded from many mountains, while the snow melt has provided life-sustaining moisture to vegetation around the margin of the basin.

Fed by runoff from the Kunlun Shan, the Hotan River (also Khotan River) flows northward—but only for part of the year. The river valley appears dry in January, but in August, it is lined with vegetation.

Along the basin’s northern margin, the Hotan joins the Tarim River, which links multiple areas of green in the August image. The Tarim River supplies water to an area roughly 300 miles (500 kilometers) long. Deciduous forests, filled with poplar trees, flourish nearby in the summer. The forests not only green up the edges of the Tarim Basin, they also stabilize the sandy soil and moderate the arid climate. As human settlement in the region has increased, however, some of this forest has been cleared to make way for irrigated crops.

Dust over the Tarim Basin