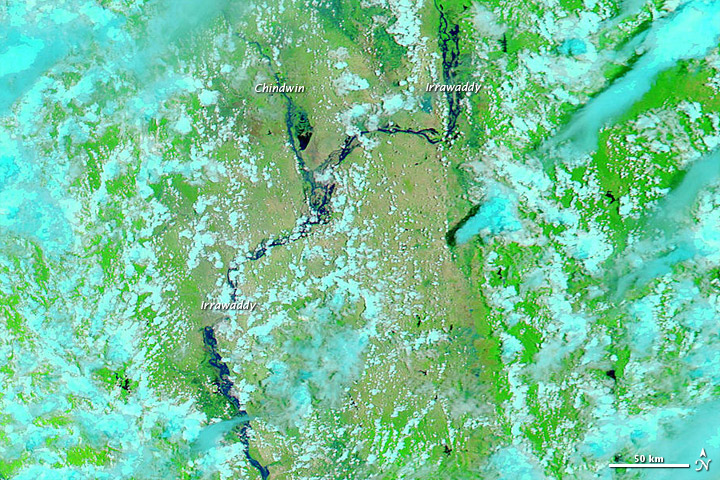 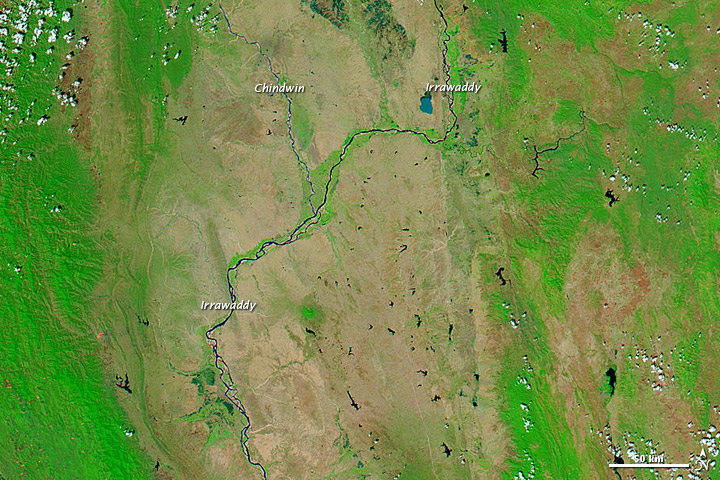 Arising from glaciers in the remote mountains of northern Burma (Myanmar), the Irrawaddy River (also known as the Ayeyarwady or Ayeyarwaddy) typically experiences its lowest water level in February, and its highest water level in August. Summertime snow and glacier melt contribute to the higher water level, but the strongest driver of fluctuating water level is the Asian summer monsoon.

Monsoon rains had swelled the Irrawaddy River and its tributary, the Chindwin River, by early August 2011. The Moderate Resolution Imaging Spectroradiometer (MODIS) on NASA’s Aqua satellite captured the top image on August 2, 2011. The bottom image shows the same region on March 6, 2011, when river levels were much lower.

Both images use a combination of visible and infrared light to increase contrast between water and land. Water varies in color from electric blue to navy. Depending on land cover, areas not under water appear green or brown (vegetation is bright green). Clouds range in color from white to pale blue-green.

Despite some cloud cover on August 2, the Irrawaddy and Chindwin Rivers are clearly swollen compared to their water levels months earlier. Monsoon rains typically fall in this region between May and October, watering both rivers and plants. In early August 2011, Myanmar Times reported that floods in Burma had caused several deaths and forced thousands of residents to evacuate, yet the current floods were not as severe as those of 2010 or 2008.

Acquired August 2, 2011, and March 6, 2011, these false-color images compare conditions along part of the Irrawaddy River in Burma, which rises substantially during the summer monsoon.