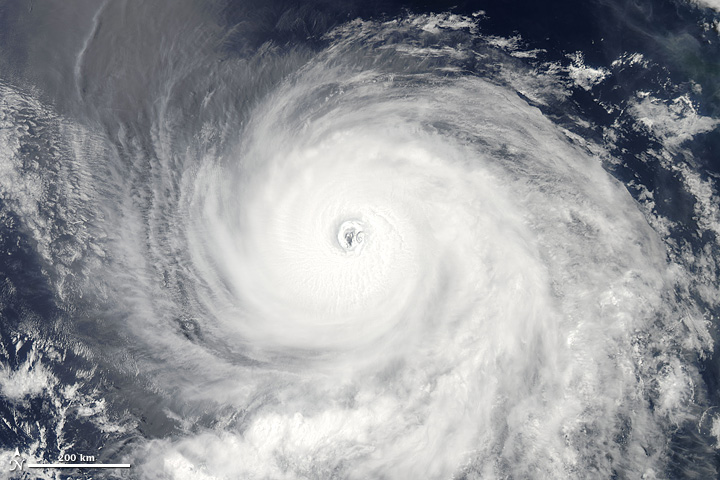 Hurricane Eugene was near its maximum intensity when the Moderate Resolution Imaging Spectroradiometer (MODIS) on the Aqua satellite acquired this image at 2:10 p.m. Pacific Daylight Time on August 3, 2011. According to the National Hurricane Center, the storm had just become a Category 4 storm with sustained winds of 220 kilometers per hour (140 miles per hour).

In this image, the powerful Eugene has a distinct, clear eye surrounded by a well-defined eyewall. The tall clouds in the eyewall cast a dark shadow around the eye. A tiny eddy is embedded in the right side of the eye. This swirl is a mesovortex, an area of turbulent, circulating air inside a larger storm. Mesovortices can enhance pockets of wind in the larger storm, and in hurricanes may play a role in intensification.

The National Hurricane Center reported mesovortices inside Eugene’s eye around the time of this image. Despite the presence of the mesovortice, Eugene started to weaken shortly after the image was taken. It is moving northwest over cooler waters and is expected to dissipate by August 9. Eugene poses no threat to land.

Hurricane Eugene had just reached category 4 strength when this detailed photo-like image was taken on August 3, 2011.