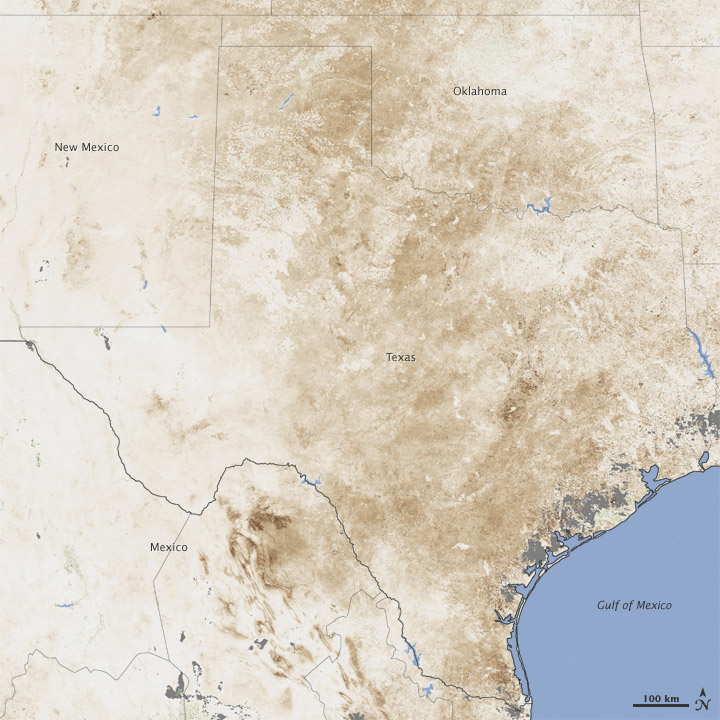 By July 2011, Texas and New Mexico had completed the driest six-month period on record. Average rain between January and June was more than eight inches (203 millimeters) below average in Texas and 3.5 inches (89 millimeters) below average in New Mexico. Record warm temperatures also persisted in Texas between April and June. The lack of rain and the warm temperatures added up to exceptional drought.

This image shows the impact of drought on plants throughout Texas, New Mexico, and Oklahoma. Made with data from the Moderate Resolution Imaging Spectroradiometer (MODIS) on the Terra satellite, the image compares plant growth between June 26 and July 11, 2011, with average conditions for the period. The image is dominated by brown, showing that plants were growing less than average throughout Texas and New Mexico.

Though drought is not a disaster that strikes all at once, it is nonetheless a devastating event that can cause death, disease, and loss of money and property. For these reasons, drought is termed the creeping disaster. So far farmers in Texas have lost 30 percent or more of their crops and pasture in 2011. The loss led the U.S. Department of Agriculture to declare a natural disaster in 213 Texas counties and additional counties in Arkansas, Louisiana, New Mexico, and Oklahoma. The declaration qualifies farmers in these regions for low-interest loans to cover their losses.

Severe drought has taken a serious toll on vegetation and farmers in Texas, New Mexico, and Oklahoma. 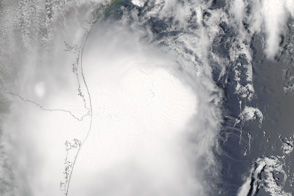 Tropical Storm Don was approaching southwestern Texas when this true-color image was taken on July 30, 2011.