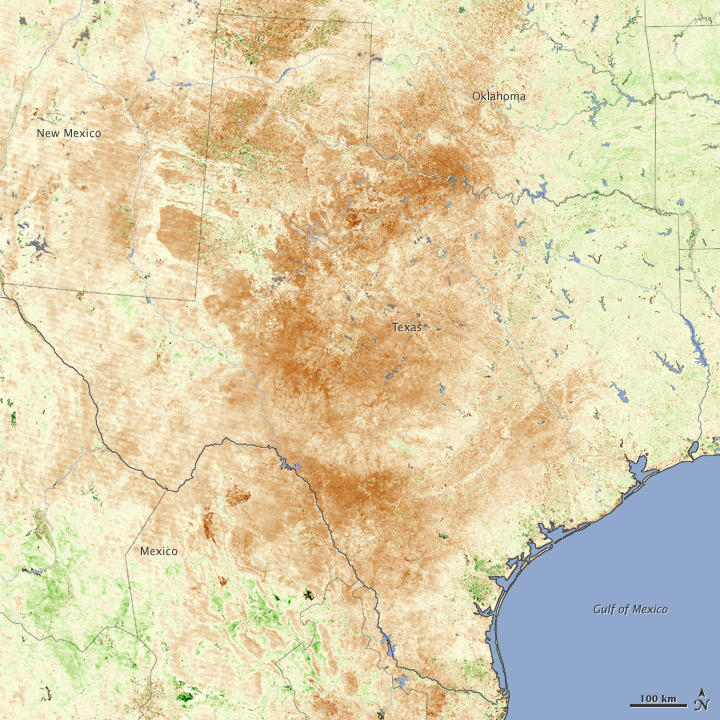 March 2011 was the driest on record for the state of Texas. Parts of west Texas received no measurable rainfall for the month, and less than an inch of precipitation over the past six months. The whole state settled into drought, with extreme to exceptional drought claiming many areas.

March also brought exceptionally warm temperatures, a trend that continued into April. By mid-April, the lack of moisture and hot weather had desiccated plants in Texas. This image, from the Moderate Resolution Imaging Spectroradiometer (MODIS) on NASA’s Terra satellite, compares plant health between April 7 and April 14 to average conditions seen between 2000 and 2010.

Satellite sensors measured the amount of leafy green plant matter at the surface. Brown colors depict places where plants were less leafy or more sparse than normal, while better-than-normal conditions are green. In mid-April, plants throughout the state showed clear signals of drought stress.

The dry plants shown in this image provided ample fuel for numerous wildfires. Since January, nearly 1.5 million acres of land have burned in Texas, said the Texas Forest Service, who also warned that fire conditions are still hazardous.

Severe drought has taken a serious toll on vegetation and farmers in Texas, New Mexico, and Oklahoma.