Ash from Puyehue-Cordón Caulle over Australia and New Zealand 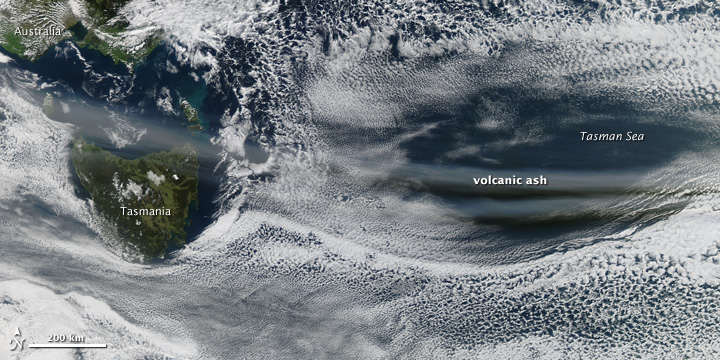 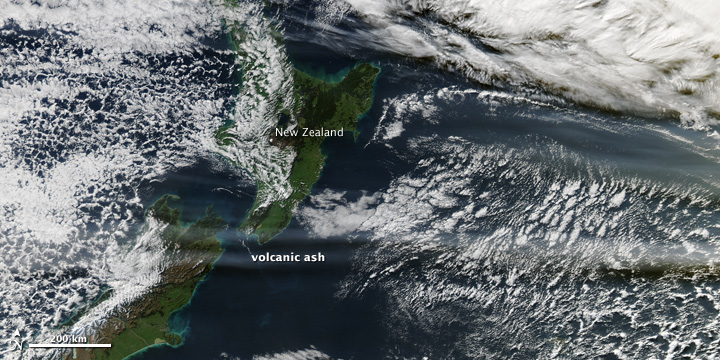 The eruption at Chile’s Puyehue-Cordón Caulle Volcanic Complex sent clouds of ash high into the atmosphere, above the weather that usually breaks up such plumes. The CALIPSO satellite recorded the plume 15 kilometers (50,000 feet) above the Earth on the second day of the eruption, and the volcano continues to push ash into the atmosphere. At these high altitudes, the ash entered the jetstream and blew quickly eastward.

By June 13, when the Moderate Resolution Imaging Spectroradiometer (MODIS) on the Aqua satellite acquired these images, a concentrated plume was visible more than half a world away over Australia and New Zealand. The top image shows the ash plume over southern Australia and the Tasman Sea, while the lower image provides a view farther east over New Zealand and the South Pacific Ocean.

The Civil Aviation Authority of New Zealand warned pilots that the ash cloud was between 20,000 and 35,000 feet (6 to 11 kilometers), the cruising level for many aircraft. Because volcanic ash can damage a jet engine, flight traffic in parts of Australia and New Zealand was canceled or diverted to lower altitudes.

A powerful volcanic eruption in South America sent volcanic ash around the world to stop air traffic in New Zealand and Australia. The ash plume is distinct in these images of the two countries.

A new satellite captured the eruption of a volcano at night on New Zealand's North Island.