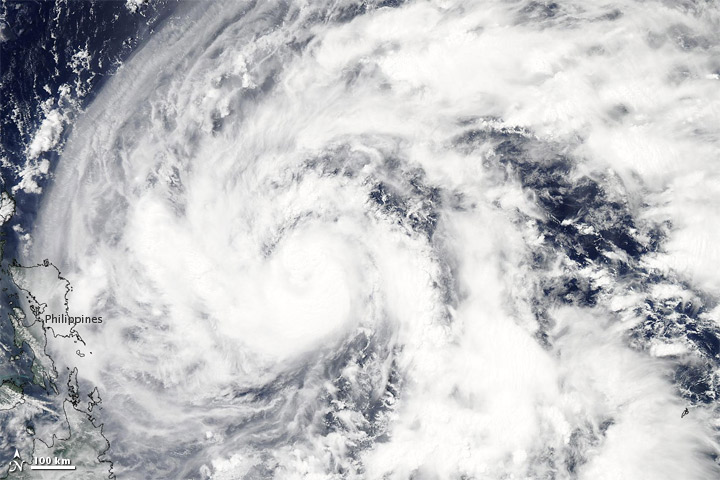 Songda formed as a tropical depression on May 20, 2011, and strengthened into a tropical storm the same day. On May 24, the storm strengthened into a typhoon. At 11:00 p.m. Manila time (15:00 UTC) on May 24, 2011, the U.S. Navy’s Joint Typhoon Warning Center (JTWC) reported that Songda was located about 500 nautical miles (900 kilometers) east-southeast of Manila, Philippines. The typhoon had maximum sustained winds of 65 knots (120 kilometers per hour) with gusts up to 80 knots (150 kilometers per hour).

The Moderate Resolution Imaging Spectroradiometer (MODIS) on NASA’s Aqua satellite captured this natural-color image of Songda on May 24, 2011. Although the storm does not show a clear eye, it bears the coiled shape typical of powerful storms. Songda’s clouds pass over the eastern Philippines (image lower left).

A warning graphic issued by the JTWC forecast Songda remaining strong as it followed a roughly northward track along the Philippines. The storm had traveled toward the west-northwest in the hours leading up to the 15:00 UTC May 24 bulletin.

Songda formed as a tropical depression on May 20, 2011. It strengthened into a tropical storm the same day, and became a typhoon four days later. 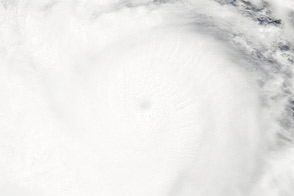