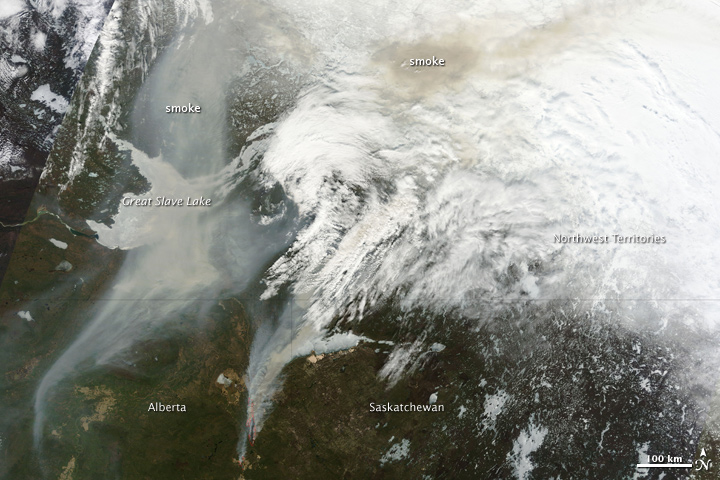 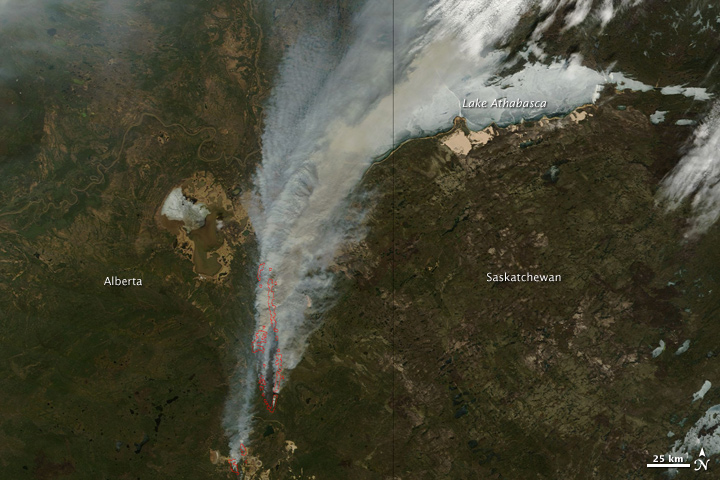 On May 16, 2011, tan and gray smoke spread hundreds of kilometers across Alberta, Saskatchewan, and the Northwest Territories in Canada. At 10:00 a.m., the Alberta government reported 116 fires burning in the province, 34 of them out of control. The following day, the total number of fires had dropped to 100, and the number of uncontrolled fires had dropped to 22. But four new fires had started to burn out of control.

The top image shows a wide area to illustrate how far the smoke traveled. The lower image provides a closer view of a massive fire burning south of Lake Athabasca. Fire detections are outlined in red. Strong winds fanned the fires on May 15 and 16, sending thick plumes of smoke to the north.

The fires forced some energy and transportation companies to suspend operations, reported CBC News. Multiple oil and gas companies suspended drilling and moved their employees to safety. Oil transport was also hampered by a shutdown of rail service and a pipeline closure. Meanwhile, fires near Lesser Slave Lake destroyed 40 percent of the nearby town on May 15, including hundreds of homes and businesses and the town hall.

On May 17, CBC News reported that British Columbia was sending 200 more firefighters, in addition to the 130 firefighters already deployed to Alberta. Fire danger remained extreme throughout much of northern Alberta on May 17, the government reported.

Wildfires in Alberta and Saskatchewan

Dozens of uncontrolled fires are burning in western Canada.