Flooding along the Richelieu River, Quebec 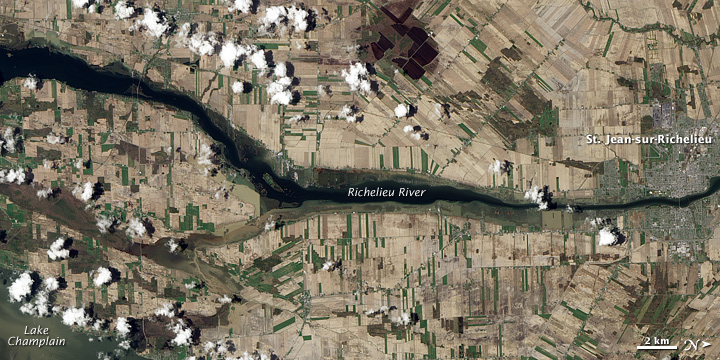 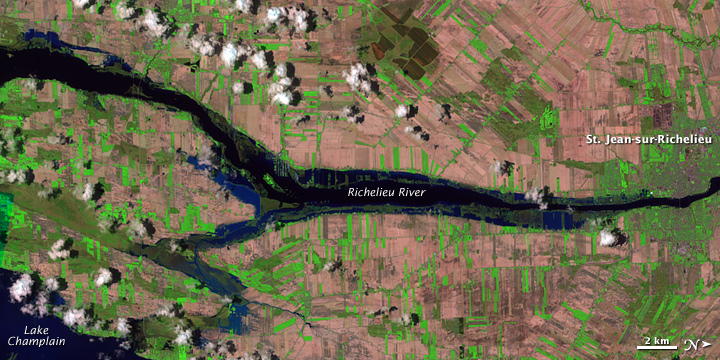 While flooding affected large parts of the U.S. Midwest and Mississippi Valley, waters rose in other areas, including New England and Quebec. By May 12, 2011, Lake Champlain had reached a new record at Rouses Point, Vermont. The Advanced Hydrological Prediction Service (AHPS) reported that the lake had exceeded its record flood level of 102.1 feet (31.1 meters) set in 1869. On May 10, the lake reached 102.8 feet (31.3 meters), although water levels were slowly declining.

On May 8, 2011, the Advanced Land Imager (ALI) on NASA’s Earth Observing-1 (EO-1) satellite captured these images of Lake Champlain and Richelieu River, which flows northward from the lake. The top image is natural color and the bottom image is shortwave infrared. In the bottom image, vegetation is bright green, soil is pink, clouds are white, and water is blue. The images are rotated so north is at right.

In these images, the north-flowing Richelieu River has spilled over its banks, inundating croplands bordering the water body. Standing water is also apparent between the river and Lake Champlain. On May 7, the Montreal Gazette reported that the Canadian Armed Forces had dispatched troops to assist with flood-protection efforts southeast of Montreal. Some of the worst flooding on record in the region had forced nearly 1,000 residents from their homes.

Acquired May 8, 2011, these natural- and false-color images show flooding along the Richelieu River. 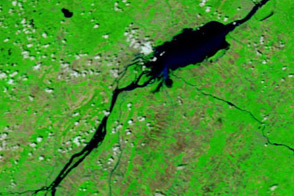 Flooding in Quebec and Northeastern U.S.