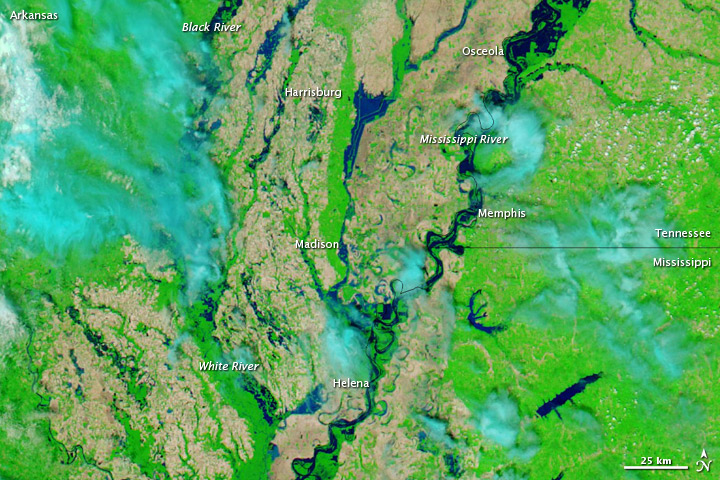 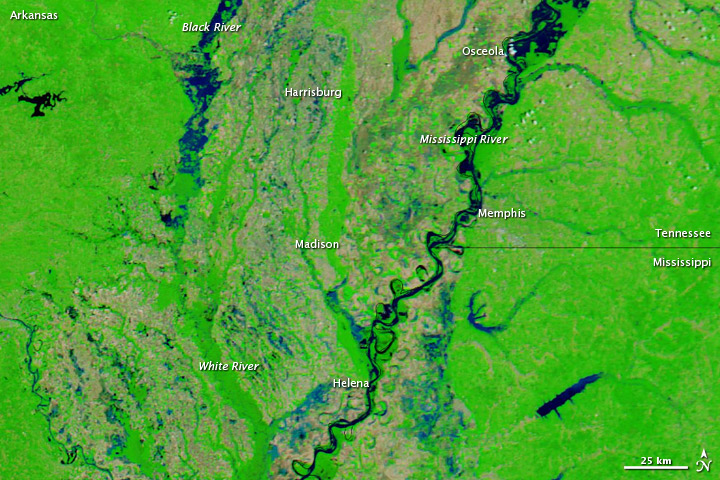 More than a million acres of Arkansas farmland was submerged by spring floods in early May 2011, the state farm bureau reported. Preliminary research by the Arkansas Farm Bureau indicated that the damage caused by the floods could exceed $500 million. Reuters reported that, between Arkansas, Tennessee, and Mississippi, a total of nearly 3 million acres had been inundated. Affected crops included wheat, corn, soybeans, and rice, the last crop likely to be the hardest hit.

The Moderate Resolution Imaging Spectroradiometer (MODIS) on NASA’s Aqua satellite acquired the top image on May 10, 2011, and the bottom image on April 29, 2011. Both images use a combination of infrared and visible light to increase the contrast between water and land. Water varies in color from electric blue to navy. Clouds (visible in the May image) are pale blue-green. Vegetation is green, and soil is brown. Both images show severe flooding along the Mississippi River.

In the 11-day period separating these images, water has risen somewhat along the Mississippi, but more obvious changes occur west of that river, where flood waters have collected. Two of the largest expanses of standing water visible in the May 10 image—one west of Helena, and the other east of Harrisburg—sit on top of agricultural fields. Although clouds obscure parts of the Black River on May 10, flooding along the White River, farther south, is apparent.

Acquired on October 25 and November 1, 2009, these false-color images show flooding in eastern Arkansas, most obvious in the swollen White River.