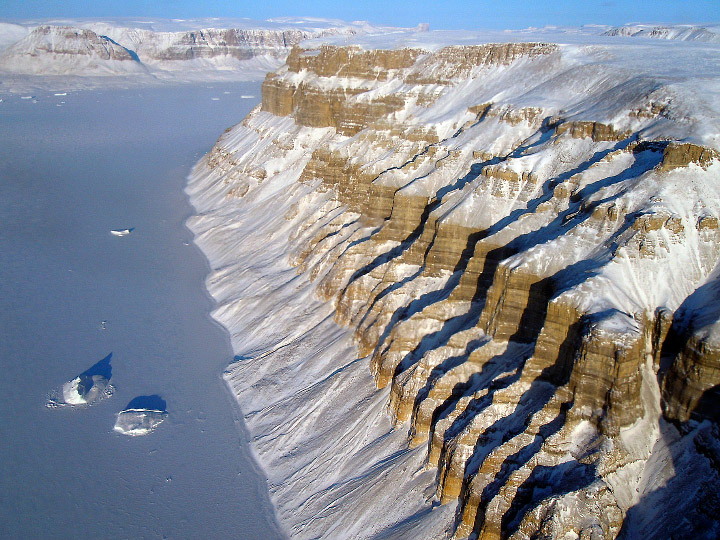 Launched in March 2009, NASA’s IceBridge mission is the world’s largest airborne survey of polar ice. The mission is aimed at filling the gap between the end of the Ice, Cloud, and land Elevation Satellite (ICESat), and the launch of ICESAT-2 (planned for 2015). In the spring of 2011, IceBridge pilots were busy over Greenland, Alaska, and the Arctic Ocean.

On March 29, sunny weather allowed scientists a clear view of deep canyons, or fjords, along the coast of northwestern Greenland. Thin, rocky ridges between the fjords cast their shadows nearly sideways, thanks to low-angled sunlight. Ice rests on the sea surface, and icebergs near the shore poke above the smooth sea ice. The area shown lies in the same region where the Petermann Glacier calved in the summer of 2010.

The acquisition of this photograph came right after a key milestone in the IceBridge mission. NASA’s IceBridge–Arctic 2011 team reported:

On March 28, IceBridge flew its eighth sea ice flight, marking the completion of all high- and medium-priority sea ice missions planned from Thule. Among the sea ice missions was a science transit back from Fairbanks to Thule on March 25, during which the P-3 surveyed in complete darkness. Researchers watched the scanning pattern of the green lasers on the sea ice below and the beautiful Aurora Borealis above.

Equipped with a 10,000-foot runway, Thule is a busy airfield, operating more than 3,000 U.S. and international flights each year. Multiple IceBridge participants blogging on the Earth Observatory have recounted the same experience: stepping into the cold at Thule to find the insides of their noses frozen.

As IceBridge flights monitor Greenland’s ice, so do scientists. The island has experienced widespread glacier melt since the turn of the 21st century. A Nature Geoscience paper published in 2010 concluded that, at their fronts, glaciers in western Greenland are melting as much as 100 times faster on their bottoms than on their tops. The higher rate of melting is driven by warming ocean waters.