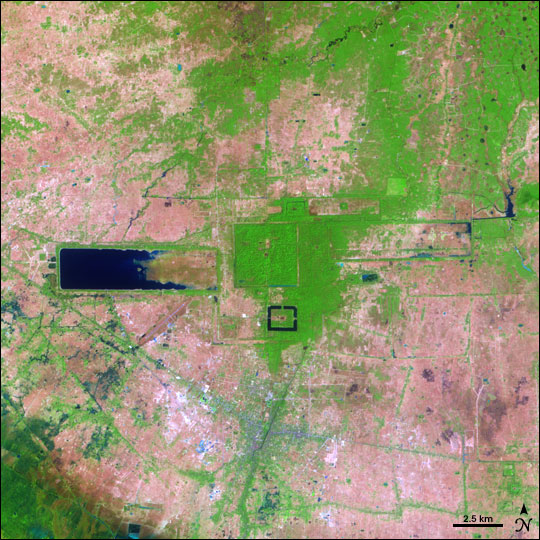 The ancient city of Angkor sat at the center of the once powerful Khmer Empire of Southeast Asia. Located north of Tonle Sap Lake in Cambodia, the capital city flourished between the 9th and 15th centuries. The royal family abandoned the city in the 15th century, and the city was swallowed by the surrounding jungle, though never entirely abandoned. Now a World Heritage Site, the ruins of the ancient city cover some 400 square kilometers. Angkor has been called one of the most important archeological sites in Southeast Asia by the United Nations Educational, Scientific and Cultural Organization (UNESCO), and the vestige of its prosperity can be found in the Angkor ruins.

Perhaps the most famous site in Angkor is Angkor Wat, a vast temple complex built by Suryayarman II in the early 12th century to honor the Hindu god Vishnu. The temple complex is clearly visible in the above image as the small black frame just below the image center. The frame is created by a 190-meter wide causeway, which encircles three galleries and five central shrines that tower up to 65 meters. The entire complex occupies an area of 1.5 x 1.3 kilometers.

To the north of Angkor Wat is the larger square of Angkor Thom, the inner royal city built in the 12th century. The now dry moat around Angkor Thom is still visible as a pale pink square cut through the surrounding green vegetation. Within the square is a palace, homes for priests and government officials, and government administration buildings.

West of Angkor Thom is the vast Western Baray, a reservoir built in the 11th century. The earthen walls constructed to hold water form a perfect rectangle, oriented exactly east-west. It is thought that the Western Baray and its predecessor, the Eastern Baray, were built to provide water to the city, control water levels on the Siem Reap River, and provide irrigation water to the surrounding plain. Though filled with silt today, the smaller Eastern Baray is also visible in this image. Its earthen walls form a 1.8 by 7.5 kilometer rectangle east of Angkor Thom. Constructed in the 9th Century, the Eastern Baray was probably about 3 meters deep and held an estimated 37.2 million cubic meters of water.

The simulated natural color image was acquired on February 17, 2004, by the Advanced Spaceborne Thermal Emission and Reflection Radiometer (ASTER) on NASA’s Terra satellite. It is centered near 13.4 degrees North latitude, 103.9 degrees East longitude, and covers an area of 22.4 x 29.9 km. In this image, water is black and blue, vegetation is bright green, and bare earth is pink.