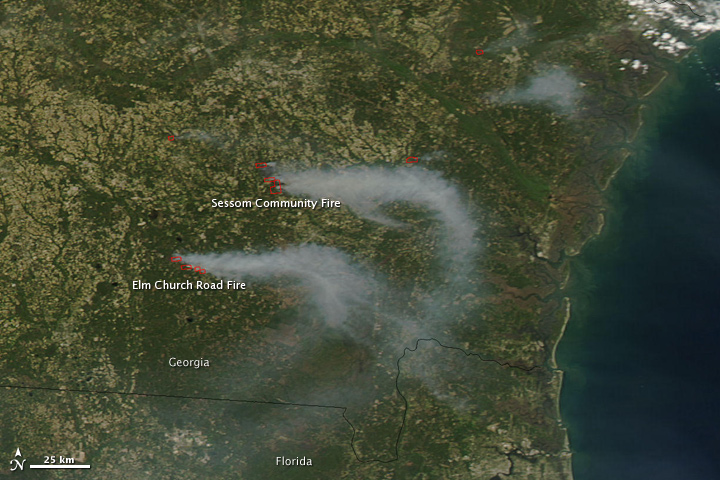 The Moderate Resolution Imaging Spectroradiometer (MODIS) on NASA’s Aqua satellite detected two large fires burning in southeastern Georgia on March 25, 2011. The fires are outlined in red and are producing dense plumes of smoke.

The U.S. Forest Service identified the fires as being the Sessom Community Fire and the Elm Church Road Fire. They were among at least 11 large fires burning in Georgia on March 25. The Elm Church Road fire burned 2,000 acres on March 24, threatening the town of Cogdell, said the Georgia Forestry Commission. The fire was clearly still large the next day, when this image was taken. Georgia’s governor declared a state of emergency in the counties where the two large fires were burning.

Though it’s not known how the fires started, the Georgia Forestry Commission said that dry conditions and strong wind gusts contributed to the fires.

Thick smokes hangs over southern Georgia and northern Florida in this image from June 13, 2011. The smoke is coming from the Honey Prairie Fire Complex burning in the Okefenokee National Wildlife Refuge.