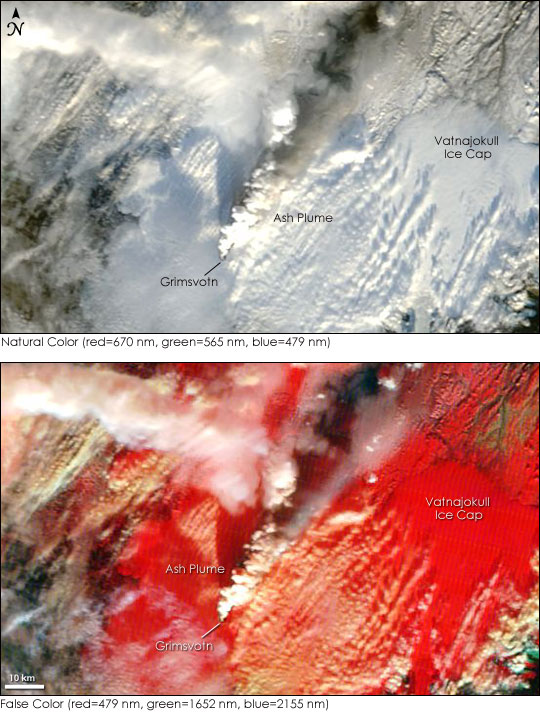 Iceland’s Grimsvotn Volcano began erupting on November 2, 2004, forcing officials to divert air traffic from the region to prevent ash from damaging aircraft engines. The volcano sits beneath the Vatnajokull Ice Cap, Europe’s largest glacier, and is Iceland’s most frequently active volcano. This eruption may be connected to the draining of a glacier lake in the volcano’s caldera. Buried under a 200-meter-thick ice shelf, the lake is under extreme pressure. Melting water fills the lake, and when levels are high enough, the water lifts the ice dam, draining the lake. Grimsvotn Lake drained in mid-October, lifting some of the pressure from the volcano. The flood was followed by a series of earthquakes, and on November 2, an eruption. As of November 3, the eruption was still occurring, and ash was reported to have drifted as far northeast as Finland.

The Moderate Resolution Imaging Spectroradiometer (MODIS) on NASA’s Terra satellite captured this view of the erupting volcano. The plume is largely made of steam rising from the melting ice above the volcano, but ash is mixed in as well. Against the white of the Vatnajokull Ice Cap, the white eruption plume is difficult to see in the true-color image. The false-color image, which shows ice as bright red, provides the contrast needed to see the steam plume. As the plume is blown north, the steam dissipates, and the dark ash is more visible. The shadow on the snow along the top edge of the image may be ash on the glacier.

As the eruption continues, flooding is likely around the volcano. So far, some of the glacier-fed rivers southeast of the volcano have flooded, and more floods are expected.

The high-resolution images provided above are at MODIS’ maximum resolution of 250 meters per pixel. The MODIS Rapid Response Team provides both the true and false color images in additional resolutions.