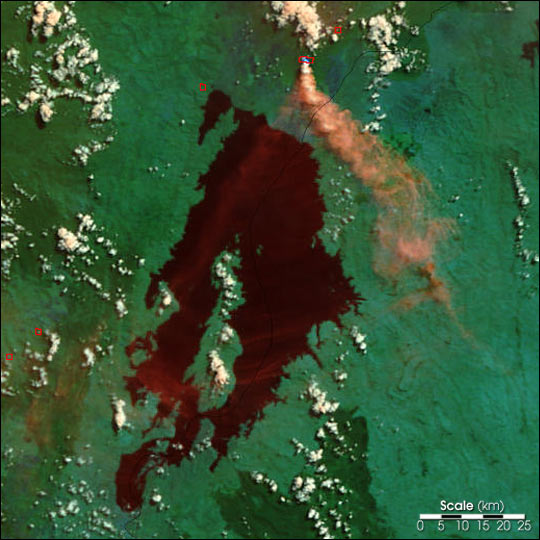 Ash and steam were pouring from the Nyiragongo Volcano on July 12, 2004, when the Moderate Resolution Imaging Spectroradiometer (MODIS) onboard NASA’s Terra satellite captured this image. Situated on the northern shores of Lake Kivu in the Democratic Republic of the Congo, the volcano has been erupting intermittently for much of 2004. Nyiragongo is one of Africa’s most well-known volcanoes because of recent catastrophic eruptions. In January 2002, lava flowed from the volcano into the city of Goma, displacing thousands. For the current eruption, there have been no reports of damage.

This false-color MODIS image shows the ash and steam cloud as orange in contrast to the lighter-colored clouds in the area. The water of Lake Kivu is black and surrounding vegetation is dark green. The ash plume is blowing approximately 75 kilometers southeast into Rwanda, right, though there is evidence that the wind had recently shifted. A faint plume is still visible extending southwest of the volcano and an arc of ash stretches over Lake Kivu between the two plumes. The shifting plume is more distinct in the true-color version of the image. In the false- and true-color images, red boxes mark where MODIS has detected a thermal anomaly, places where the temperature is much higher than the surrounding region. The boxes typically mark active fires, though in this case, one marker appears to be over the top of the volcano. The above image is at MODIS’ maximum resolution of 250 meters per pixel. The image is available in additional resolutions.