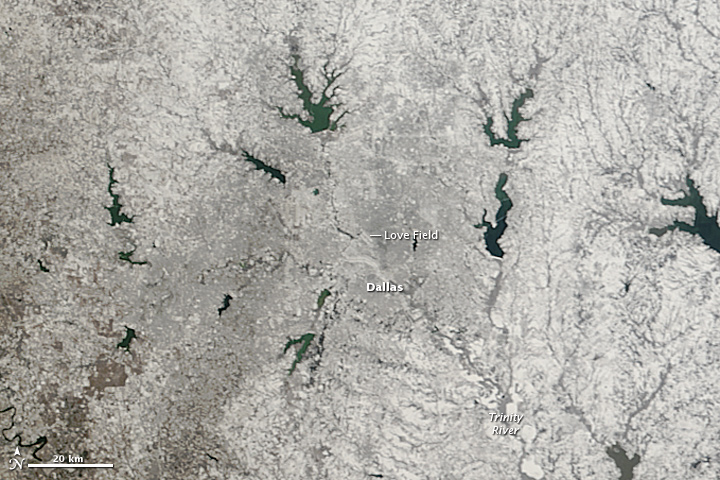 As if Mother Nature made a special effort to help fans and players from Pittsburgh and Green Bay feel at home, the city of Dallas was covered with snow on Super Bowl Sunday, February 6, 2011. On February 4, a winter storm settled four to six inches (10–15 centimeters) of snow over northern Texas, including Dallas. The city gets 2.6 inches (6.6 cm) of snow per year on average, according to the National Weather Service.

Fortunately, game day was clear and sunny, allowing the Moderate Resolution Imaging Spectroradiometer (MODIS) on NASA’s Terra satellite capture this image of the snow-covered city. Though the region is entirely white except for the blue-green lakes and reservoirs, the wider Dallas metro area is slightly darker than the less populated land around it. The large image, which includes a wider area, shows snow across northern Texas and into Oklahoma.

Two bright stripes north of downtown Dallas mark the location of Love Field airport. The white stripes are probably not runways, as the image may initially suggest, but are likely larger snow-covered grassy areas around the runways.

According to news reports, the snow led to icy roads and the cancellation of more than 300 flights on February 4. Another winter storm is expected to drop three to five inches (8–13 cm) of snow on northern Texas tonight and tomorrow, warned the National Weather Service.