Sediment over the Great Barrier Reef 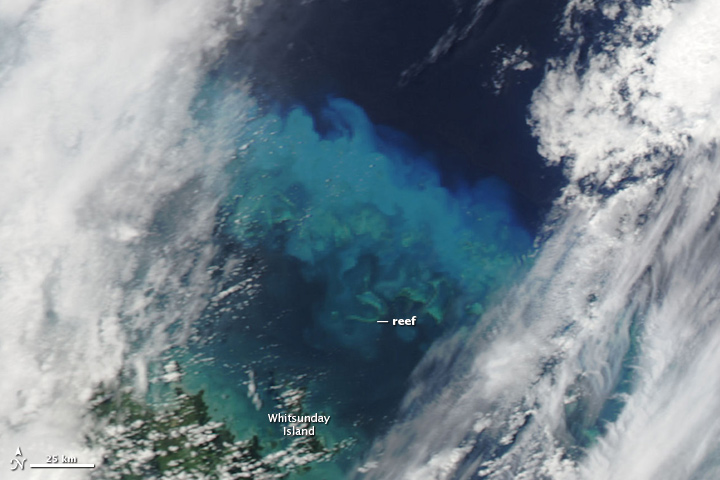 With high winds, a powerful storm surge, and torrential rains, Cyclone Yasi churned the waters of the Coral Sea off Australia’s Queensland coast. On February 4, 2011, as the clouds began to clear, evidence of the storm’s violence lingered in the water. The normally clear, shallow water of the Great Barrier Reef was clouded with sediment brought to the surface by the cyclone.

Light reflects off the bright-colored sediment, turning the ocean electric blue. Sections of the reef—well-defined shapes that are greener than their surroundings—are visible amid the clouded water. The section of reef shown here is near Whitsunday Island National Park. The large image, which shows a wider area, reveals sediment in the water along much of the coast.

The Moderate Resolution Imaging Spectroradiometer (MODIS) on NASA’s Aqua satellite acquired this image in the early afternoon on February 4. Twice-daily images of northeast Australia are available from the MODIS Rapid Response System.

Streaks of brilliant blue water over Australia’s Great Barrier Reef in this true-color image reveals some of Cyclone Yasi’s impact on the ocean.

Heavy Sediment along the Queensland Coast