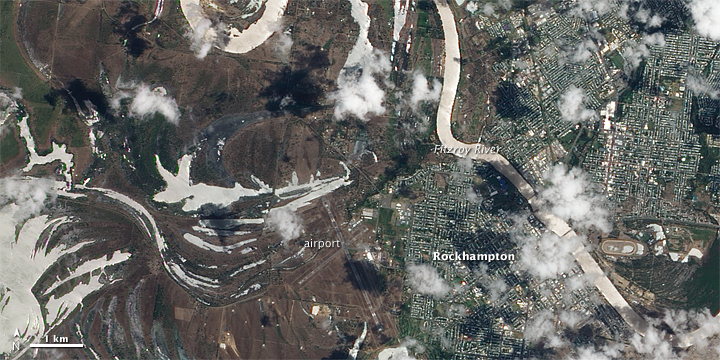 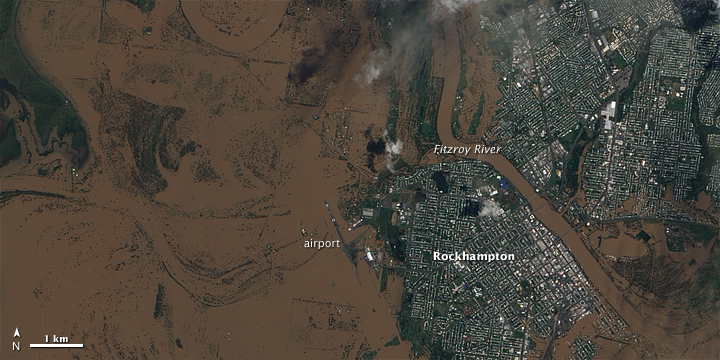 Heavy rains in Queensland, Australia, pushed the Fitzroy River over its banks at the beginning of 2011. The overflowing river submerged much of Rockhampton, not far from the Queensland coast. In late January, however, flood waters receded, leaving behind a mixture of mud, standing water, and damaged infrastructure.

The image from January 9 shows the city largely overrun by flood water, especially west of the river. Thick with sediment, the water is muddy brown, and only isolated patches of land, developed or otherwise, rise above it. The airport is completely submerged.

The image from January 25 shows the Fitzroy River mostly confined within its banks. Although large pools of standing water linger west of the river, the water level has dropped. Crisscrossing runways at the airport have emerged.

The water in early January is muddy brown, but the water in late January appears silvery white. This difference probably results from two factors. One factor is sunglint. When the satellite passes overhead at just the right angle, sunlight reflects off the water’s surface and into the satellite sensor. The other factor is that, in late January, the water likely carries less sediment that it did at the flood’s peak. Flooded rivers typically move large quantities of eroded earth. The mud lingering west of the Fitzroy River on January 25 may result from a combination of saturated ground and mud delivered from elsewhere by the Fitzroy.