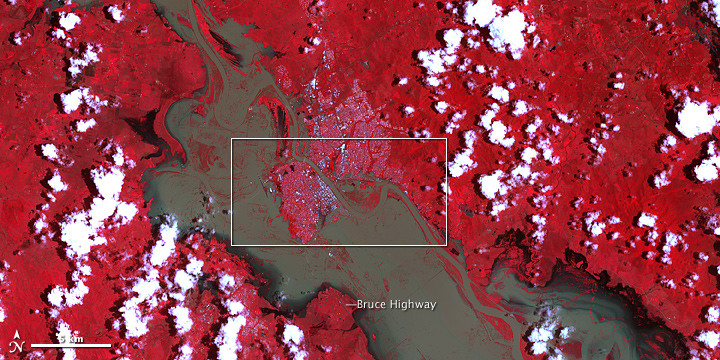 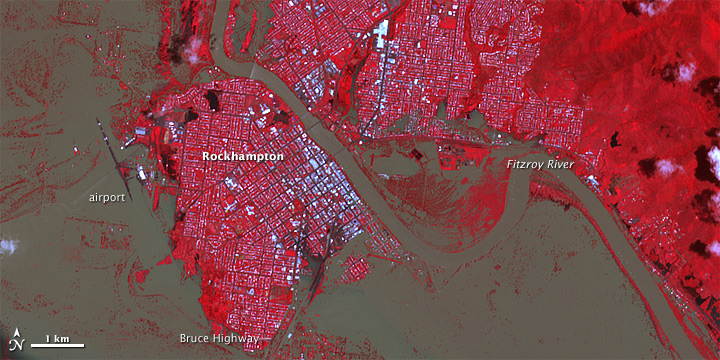 Though water levels had started to subside, the Australian city of Rockhampton was still inundated when the Advanced Spaceborne Thermal Emission and Reflection Radiometer (ASTER) on NASA’s Terra satellite took this image on January 7, 2011. The image includes both infrared and visible light to increase the contrast between muddy floodwater and brown earth. Reflective surfaces on buildings make the city shine white against a background of plant-covered land (which shows up as red). Sediment-loaded water is brown, while clearer water is black.

The top image provides a wider view of the swollen Fitzroy River, which surrounds the western half of the city. The closer view shown in the lower image reveals the extent of the flooding in the city itself. Brown water covers rectangular blocks, particularly in southern Rockhampton. Tiny white flecks within the flooded area are buildings. Approximately 300 homes are believed to be flooded, reported the Australia Broadcasting Corporation.

The river has isolated Rockhampton both by land and air. The airport is flooded, with one runway dry and the other underwater. Airport buildings appear to be surrounded by the flood. The Bruce Highway leaving the city to the south is also under water.

According to the Australian Bureau of Meteorology, the Fitzroy River was at 9.15 meters (30 feet) on Friday, January 7, 2.15 meters (7 feet) above flood stage. The river peaked at 9.2 meters (30.2 feet) on Wednesday, and forecasters expect the river to recede very slowly over the next week.