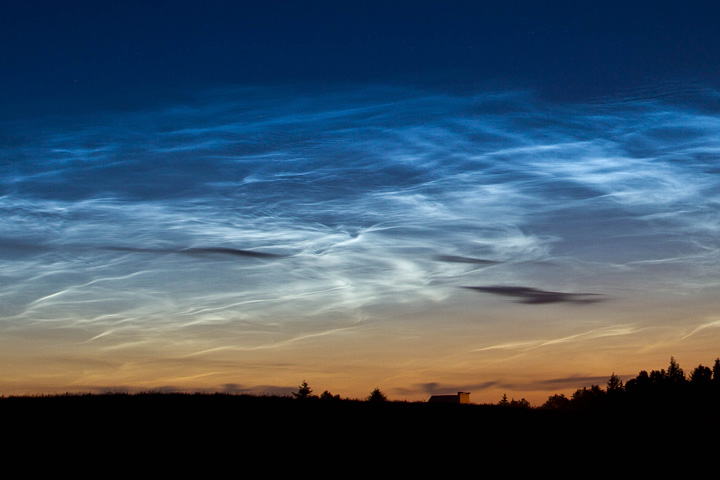 After the Sun sets on a summer evening and the sky fades to black, you may be lucky enough to see thin, wavy clouds illuminating the night, such as these seen over Billund, Denmark, on July 15, 2010. Noctilucent or polar mesospheric clouds, form at very high altitudes—between 80 and 85 kilometers (50–53 miles)—which positions them to reflect light long after the Sun has dropped below the horizon. These “night-shining” clouds are rare—rare enough that Matthew DeLand, who has been studying them for 11 years, has only seen them once in person. But the chances of seeing these elusive clouds are increasing.

DeLand, an atmospheric scientist with Science Systems and Applications Inc. and NASA's Goddard Space Flight Center, has found that polar mesospheric clouds are forming more frequently and becoming brighter. He has been observing the clouds in data from Solar Backscatter Ultraviolet instruments that have been flown on satellites since 1978. The graph above shows how the brightness of the clouds has changed in the Northern Hemisphere. For reasons no one fully understands, the brightness wiggles up and down in step with solar activity, with fewer clouds forming when the Sun is most active. The biggest variability is in the far north. Underlying the changes caused by the Sun, however, is a trend toward brighter clouds. The upward trend in brightness, says DeLand, reveals subtle changes in the atmosphere that may be linked to greenhouse gases.

Polar mesospheric clouds are extremely sensitive to changes in atmospheric water vapor and temperature. The clouds form only when temperatures drop below -130 degrees Celsius (-200 Fahrenheit), when the scant amount of water high in the atmosphere freezes into ice clouds. This happens most often in far northern and southern latitudes (above 50 degrees) in the summer when, counter-intuitively, the mesosphere is coldest.

Changes in temperature or humidity in the mesosphere make the clouds brighter and more frequent. Colder temperatures allow more water to freeze, while an increase in water vapor allows more ice clouds to form. Increased water vapor also leads to the formation of larger ice particles that reflect more light.

The fact that polar mesospheric clouds are getting brighter suggests that the mesosphere is getting colder and more humid, says DeLand. Increasing greenhouse gases in the atmosphere could account for both phenomena. In the mesosphere, carbon dioxide radiates heat into space, causing cooling. More methane, on the other hand, puts more water vapor into the atmosphere because sunlight breaks methane into water molecules at high altitudes.

So far, it’s not clear which factor—water vapor or cooling—is causing polar mesospheric clouds to change. It’s likely that both are contributing, says DeLand, but the question is the focus of current research.