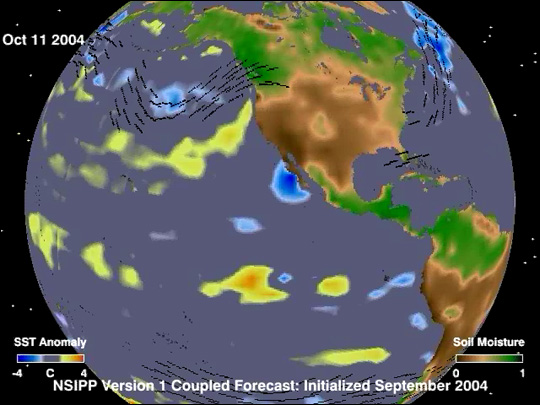 A mild warming of the surface waters in the Central Equatorial Pacific Ocean over the past few months has lead some researchers to believe that weak to moderate El Niño conditions will develop during the fall of 2004. However, a warming of the waters adjacent to South America has yet to occur. There the trade winds continue to blow more strongly than normal making warming of the surface waters off the South American coast unlikely. Since the major 1997-98 El Niño event, the trade winds of the equatorial Pacific have exhibited a “split personality” mode in which the central Pacific warms while the eastern Pacific sea surface temperature remains cool. In the west, occasional weakening of the trade winds has occurred; however, in the east, the trades hold steady or have been stronger than normal. This situation does not allow a warm signal from the central Pacific to move eastward and warm the waters off South America as is more traditionally associated with El Niño.

This split-personality mode does not have the same effects on weather as does a typical El Niño, which is known to bring increased rainfall to Southern California while inhibiting U.S. east coast hurricanes from making landfall. NASA’s Seasonal-to-Interannual Prediction Project (or NSIPP) forecast models for the equatorial Pacific show no indication of a significant warming of the waters off of South America, nor a change in the trade winds. NASA continues to monitor the situation in the Pacific closely with its Earth Observing System (EOS) satellites, and will be alert to any change in the current split personality mode of the equatorial trade winds.

The false-color image above represents the NSIPP model’s prediction of sea surface temperature and soil moisture conditions on October 11, 2004 (one week after this image was published). The colors in the ocean represent “temperature anomaly”—blue means up to 4°C colder than average and red means up to 4°C warmer than average. The colors on land represent soil moisture. Dark green shows where the soil contains more moisture than average due to increased rainfall and dark brown shows where the soil contains less moisture than average due to dry or drought conditions. The black lines with arrows show the predicted direction of the atmospheric circulation patterns.

Click to play the NSIPP forecast animation (10.1 MB), which shows predicted conditions from September 2004 through August 2005. It is interesting to note that while the NSIPP model doesn’t predict any significant El Niño conditions for this year, it does forecast the onset of an El Niño in the summer of 2005. However, NASA oceanographer and climate modeler David Adamec cautions us to take that forecast with a grain of skepticism—the accuracy of the NSIPP model is not very accurate more than 6 months into the future.