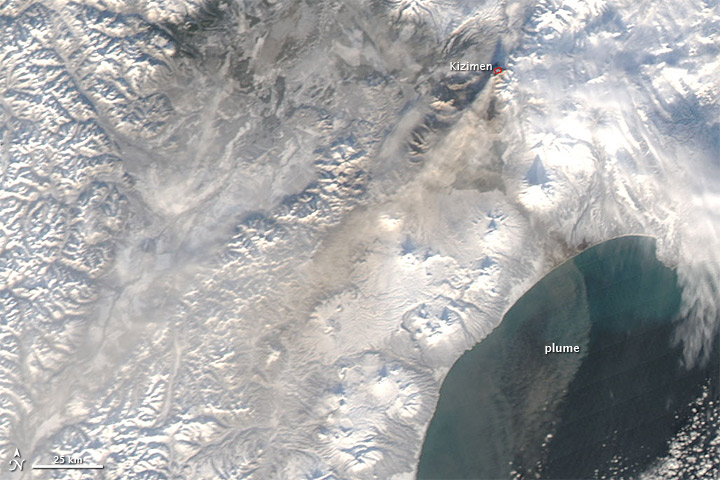 The red outline at the volcano’s summit is a hotspot where MODIS has detected unusually high surface temperatures. Kizimen’s plume blows toward the southwest and southeast, likely the result of changing winds. In the southeast, the plume appears as a faint gray-beige veil over the ocean. An expanse of snow west of the volcano looks gray, perhaps the result of a recent ashfall from Kizimen.

Rising to an altitude of 2,376 meters (7,795 feet), Kizimen Volcano is a stratovolcano composed of hardened lava, solifidied ash, and rocks ejected by earlier eruptions. The volcano has experienced multiple periods of long-term growth, and lava domes overlap at the summit.

Acquired December 31, 2010, this natural-color image shows a volcanic plume from Kizimen blowing over the Kamchatka Peninsula.

An ash and steam plume from Kizimen Volcano streams over the icy waters of Kamchatskiy Zaliv.