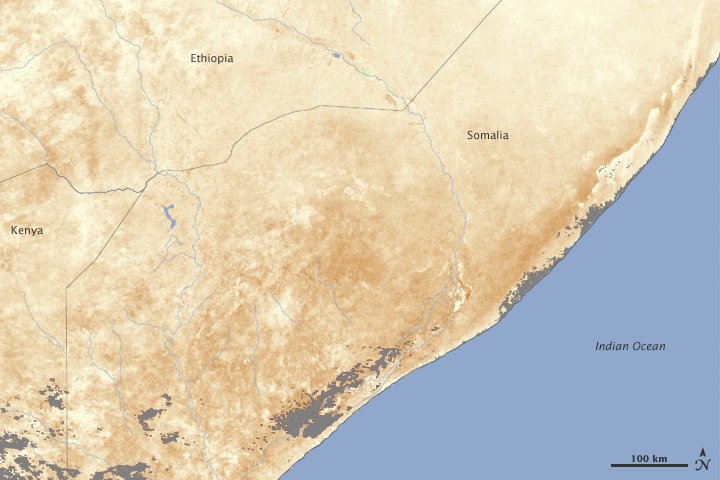 From October to December, the Deyr rains typically fall over Somalia, nourishing pastureland and newly planted crops. But in 2010, rains were light in October and even sparser in November. As a result, plant growth was poor throughout the country.

This image shows vegetation conditions in southern and central Somalia between November 17 and December 2, 2010. The vegetation measurement is, in essence, a record of the amount of photosynthesis observed by the Moderate Resolution Imaging Spectroradiometer (MODIS) on NASA’s Terra satellite. This image shows plant growth in November and December 2010 compared to average conditions for the same period between 2000 and 2009. The general brown tone indicates that conditions were poor and fewer plants were growing in 2010.

The poor conditions seen in the image translate to failed crops and poor pasture for livestock in parts of southern and central Somalia, said the United Nations, who predicted food insecurity in early 2011. The poor rainfall is likely tied to La Niña, cold waters in the central and eastern Pacific Ocean that affect rainfall patterns globally.

This image reveals the impact of drought on plants growing in central and southern Somalia in late November and early December 2010.