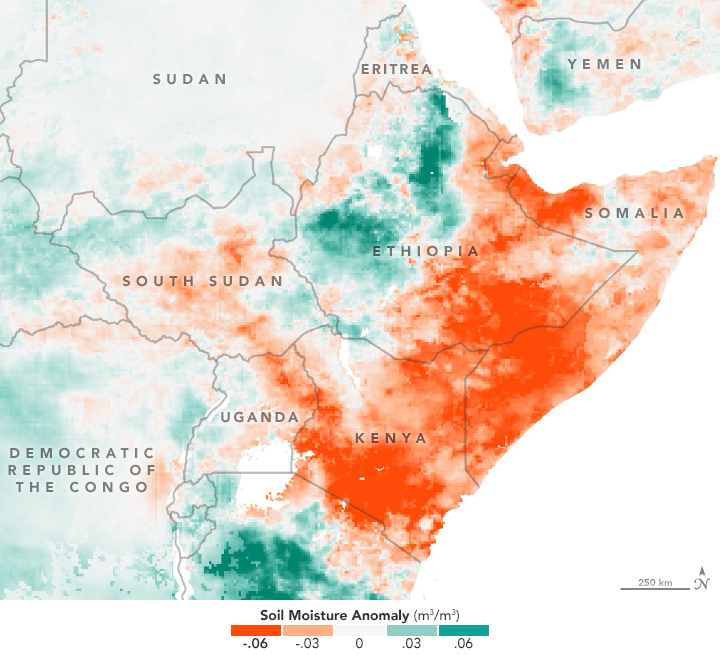 Drought is apparent across much of East Africa after seasonal rains in late 2018 and 2019 failed to deliver much moisture to the region. The dearth of precipitation has contributed to a crisis for food security; that is, people may at times lack access to sufficient food.

Deficits in rainfall eventually show up as deficits in soil moisture. In turn, moisture deficits—especially at critical times in planting and growing seasons—can devastate rainfed crops. Each of these components of drought are detectable from space, and NASA satellite data and land surface models help inform agricultural drought monitoring systems. These systems are used to warn of famine and reduce risk in food insecure regions.

This map shows soil moisture anomalies in April 2019—an expression of drought and how it affects conditions for growing crops. Areas in green had more moisture in the upper layers of soil than the norm for April, while areas in red had less.

Below-normal soil moisture appears across the Horn of Africa, one of the regions targeted by the Famine Early Warning System Network (FEWS NET). The dryness is due to below-average rainfall during the “Gu,” the longer of two annual rainy periods. According to FEWS NET, Gu rainfall amounts through May 5 were about half of normal. This poor Gu season (usually April through June) follows a below-average “Deyr” season, the short rainy period (October and November).

In Somalia, rainfall was spotty, with just a few measuring stations in the north recording significant accumulations in April. According to a report by the UN Food and Agriculture Organization, more than 2 million people in Somalia could face severe hunger between July and September 2019.

In recent decades, Somalia has long faced bouts of drought, when rainy seasons failed to deliver much water for crops and livestock for consecutive seasons. Prior to 2019, drought in 2016-2017 caused large-scale crop failure, livestock deaths, and the displacement of hundreds of thousands of people.

FEWS NET reports that Somalia is expected to reach the “emergency” food insecurity phase (the fourth out of five phases, just below “famine”). The third phase—“crisis”—is expected in Ethiopia, Somalia, Kenya, and Uganda.