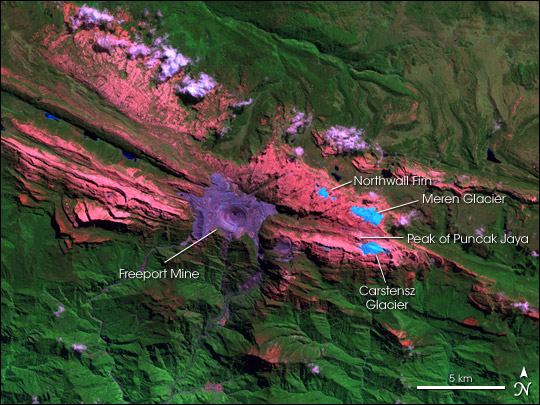 The Seven Summits are the highest peaks on each of the Earth’s seven continents. However, there is some debate about whether to count New Zealand and Oceania (which adds the Pacific Islands and the Indonesian archipelago) in with Australia. If Oceania is considered as part of the Australian continent, then the tallest peak is Puncak Jaya, also known as Carstenz’s Pyramid. Its 4,884-meter-tall (16,024-foot) summit stands well above both Australia’s Mt. Kosciuszko and New Zealand’s Aoraki/Mt. Cook. Located in the Papau province of Indonesia (formerly known as Irian Jaya), the peak is in the midst of the 2,500-km-long Pegunungan Maoke, or Central Range, of the island of New Guinea. Its anglicized name comes from the Dutch navigator Jan Carstenz who first surveyed the peak from the island’s coastline in 1623 on a rare clear day. When Indonesia took control of the province in the 1960s, the peak was renamed Puncak Jaya (Victory Peak).

The first recorded climb of the mountain was in 1962 by a team led by the Austrian climber, Heinrich Harrer (of Seven Years in Tibet fame). Since then, particularly since the interest in the Seven Summits concept, Puncak Jaya has been visited many times. It is a moderately difficult climb on the standard route up the north face and along the summit ridge, which is all hard rock surface. The area is highly inaccessible, requiring a 100-km hike from the nearest town with an airport—Timika—to the base camp, which usually takes about four or five days each way. A local band of guerillas, fighting to make the Papau province independent of Indonesia, are somewhat active in the area and the Freeport Copper Mine at Tembagapura is an occasional flashpoint. The guerrillas see the mine as both a sign of imperialism and a source of pollution. Thus, climbers must apply for permission to enter the area from the central government, though visitors are generally considered welcome by local residents.

While Puncak Jaya’s peak is free of glaciers, there are several on its slopes, including the Carstensz Glacier, the Meren Glacier, and Northwall Firn (hanging glaciers). Being equatorial, there is little variation in the mean temperature during the year (around 0.5°C) and the glaciers fluctuate on a seasonal basis only slightly. However, analysis of the extent of these rare equatorial glaciers from historical records show significant retreat since the 1850s, indicating a regional warming of around 0.6° C per century between 1850 and 1972. The glacier top of Puncak Trikora in the Pegunungan Maoke disappeared completely some time between 1939 and 1962. Since the 1970s, the extent of the glaciers have been monitored by satellites, most especially the Landsat series, as the challenges to accessing the area and surveying from the ground are so high. However, the scene above is a rare satellite acquisition that is reasonably cloud free.

This image was acquired by Landsat 7’s Enhanced Thematic Mapper Plus (ETM+) sensor on May 29, 2003. This is a false-color image made using shortwave-infrared, near-infrared, and green wavelengths (ETM+ bands 7, 4, and 2). In this scheme, snow and ice appears blue while clouds are white, bare unvegetated land such as the rocky limestone summit ridges appear red or pinkish, the deep purple and grey is the open pit copper mine while the lush rainforest of the lowlands appears green. In the large format image, runoff into the rivers south of the mine shows up in deep purple, much of which is fine debris washed downstream from the mine.