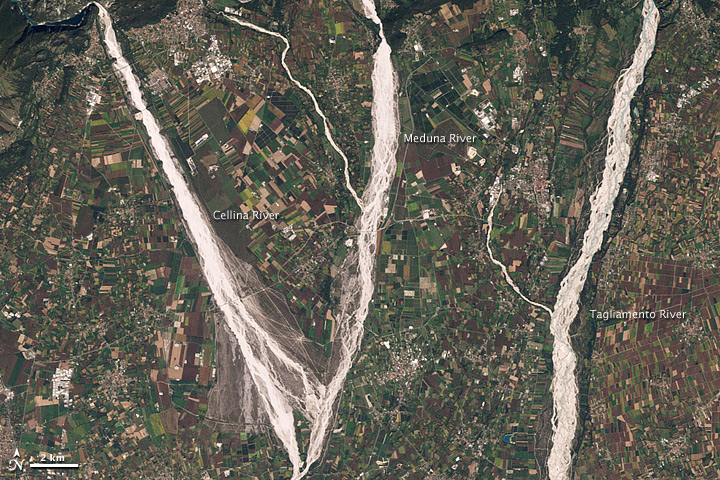 In northeastern Italy, the Cellina, Meduna, and Tagliamento Rivers flow in unison toward the Adriatic Sea. Fed by streams from nearby mountains, these gravel-bottomed rivers flow over a plain packed with farms. The Thematic Mapper on NASA’s Landsat 5 satellite captured this natural-color image of the region on September 21, 2010.

Rain falls frequently in the mountainous region north of these rivers, and some areas receive as much as 3,000 millimeters (120 inches) of rain a year, making it one of the wettest places in Italy. Because much of that rain comes in heavy showers, significant quantities of mud and debris are eroded from the landscape into the rivers. The mountains upstream are also seismically active and prone to landslides.

For both reasons, the Cellina, Meduna, and Tagliamento rivers are prone to floods and often have to bear more sediment than they can effectively suspend and carry. As a result, the river beds often change shape, dropping the sediments to form braided and meandering channels, as shown above.

Surrounding the rivers, the rectangular shapes of green, gold, and brown are farms. The croplands mingle with villages here and further downstream, some of them quite close to river channels. Some hydrologists are concerned about continued development further south on this flood plain because damage has occurred fairly frequently.