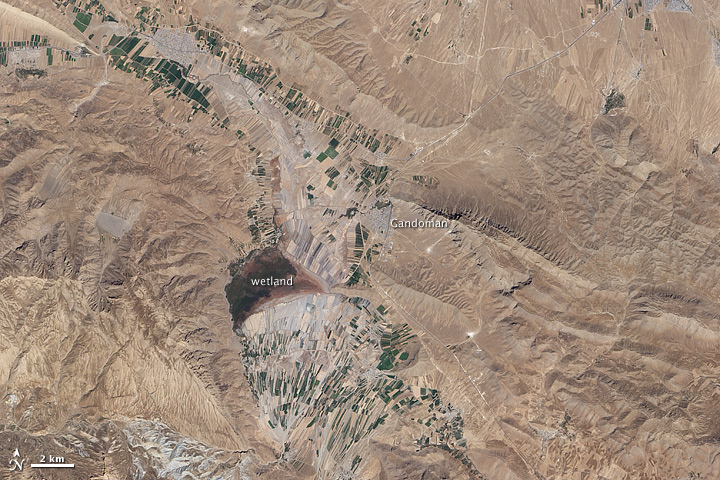 Along the coast of the Caspian Sea, Iran enjoys a subtropical climate where vegetation thrives on abundant precipitation. Throughout much of the country, however, arid and semiarid conditions prevail. In these regions, crops depend heavily on irrigation. In central Iran, south of the city of Esfahan, or Isfahan, irrigated croplands and small settlements speckle arid foothills of the Zagros Mountains.

On September 30, 2010, the Advanced Land Imager (ALI) on NASA’s Earth Observing-1 (EO-1) satellite captured this natural-color image of an area south of Esfahan, including the town of Gandoman. Northwest and south of the city, irrigated fields make elongated rectangles of green, interspersed with earth-toned fallow fields. Croplands and settlements are mostly confined to flat areas.

Surrounding the farmed areas are rugged hills and valleys, mostly devoid of vegetation. East-northeast of Gandoman, a long ridge casts shadows to the north. It is one of several such ridges visible in this image, and east of the town, the ridges primarily run parallel to each other. In the west, ridgelines appear more random, extending in multiple directions. Here in the foothills of the Zagros Mountains, elevations are roughly comparable to those of Denver, Colorado, at the base of the foothills of the Rocky Mountains.

Near the center of the image, what might look like a semicircular ridge casting a long, uneven shadow is actually a combination of flat, farmed land bordered on the north by an expanse of natural vegetation. Although water is scarce in this part of Iran, small lakes and wetlands occur sporadically throughout the region.

Acquired January 5, 2004, this natural-color image shows Persepolis and the surrounding landscape, with flat, cultivated land in the west and rugged mountains in the east.