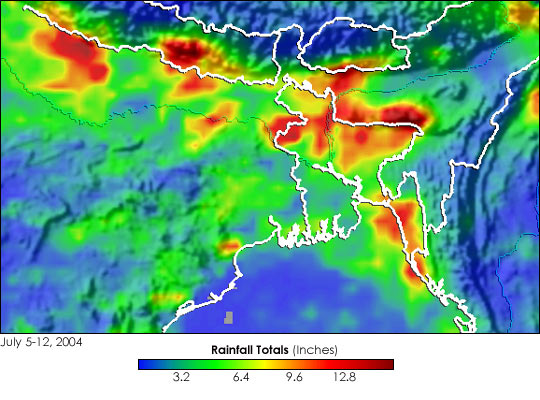 Some of the worst flooding in more than a decade is now being reported across southern Asia as a result of summer monsoon rains. So far there have been more than 240 fatalities in Nepal, India, and Bangladesh since the flooding began, and up to 10 million people have been displaced by the widespread flooding. Nepal has been hit hard by flash floods and mudslides. In India, the hardest hit states are Assam and Bihar. Twenty-two of the 24 districts in Assam are reported to be under water as the Brahmaputra River continues to rise. Meanwhile, in Bangladesh the worst hit province is Sylhet where the Surma and Kushiyara Rivers have flooded large areas. Sylhet borders the Indian state of Assam.

Since its launch in November 1997, the Tropical Rainfall Measuring Mission satellite has been providing estimates of rainfall over the global Tropics with unprecedented coverage. Armed with both passive and active sensors, TRMM is able to cover vast areas of the Tropics where rainfall is poorly measured such as over oceans and over land areas where radar coverage is poor or lacking. The TRMM-based, near-real-time Multi-satellite Precipitation Analysis (MPA) at NASA’s Goddard Space Flight Center monitors rainfall over the global tropics. MPA rainfall totals for the period July 5-12, 2004, are shown for southern Asia. Widespread areas of 10 inches or more (red areas) occur along southern Nepal, northern and northeastern India, and northern and southeastern Bangladesh. Some of the highest totals, approaching 16 inches (dark red areas), occured over central Nepal at the base of the Himalayan Mountains and over the Khasi Hills near the border between province of Sylhet in Bangladesh and the state of Assam, India.

Dark blue and black flood waters surround Dhaka, the capital of Bangladesh, in this MODIS image, taken on August 3, 2004.