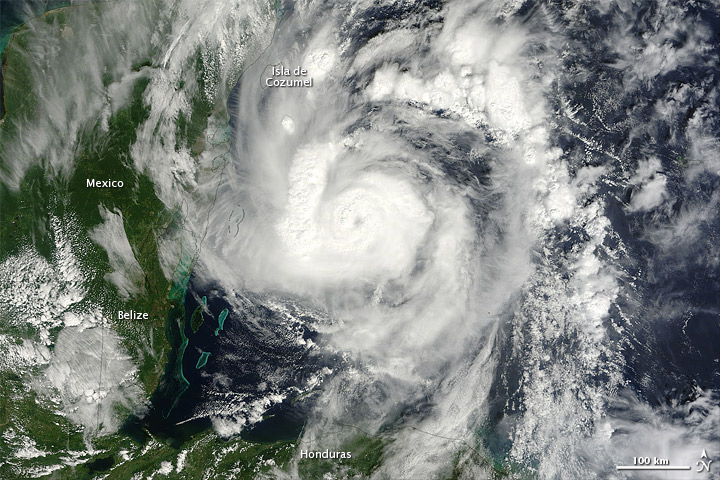 The Moderate Resolution Imaging Spectroradiometer (MODIS) on NASA’s Terra satellite captured this natural-color image of Hurricane Paula at 11:20 a.m. CDT (16:20 UTC) on October 12 while over the Caribbean Sea, just off the coasts of Mexico, Belize, and Honduras. Coiled around a distinct eye, the storm’s most intense clouds spanned roughly 200 kilometers (125 miles).

By October 14, 2010, Paula had weakened to a tropical storm. At 10:00 a.m. CDT on October 14, the NHC reported that Paula had winds of 70 miles (110 kilometers) per hour. Though less intense than it had been two days earlier, Paula still posed hazards. A tropical storm warning was in effect for parts of Cuba, and a tropical storm watch was in effect for parts of the Florida Keys. The NHC warned of high winds and heavy rains—amounting to 10 inches (25 centimeters) in isolated areas.

Small but powerful, Paula strengthened to a hurricane over the Caribbean Sea before weakening to a tropical storm.