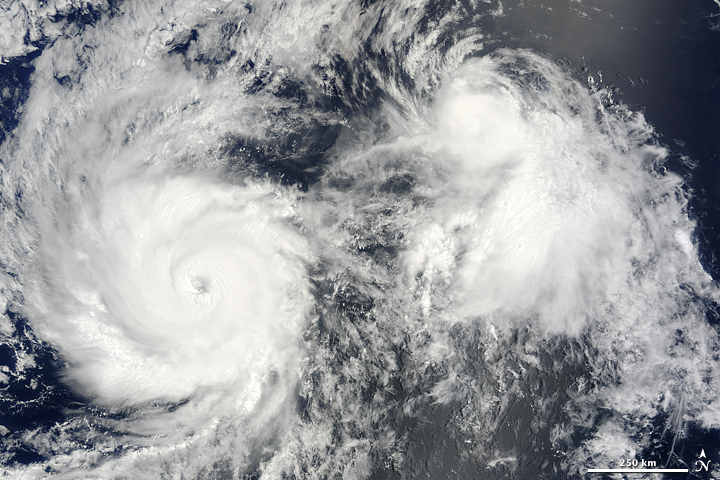 Hurricane Felicia was gaining strength over the East Pacific when the Moderate Resolution Imaging Spectroradiometer (MODIS) on NASA’s Terra satellite captured this image at 9:00 a.m. local time, on August 5, 2009. According to the National Hurricane Center, two hours after this image was taken, Felicia had winds of 205 kilometers per hour (127 miles per hour or 110 knots) with gusts to 250 km/hr (155 mph or 135 knots). Within another six hours, the storm had grown into a dangerous Category 4 hurricane with sustained winds at 220 km/hr (140 mph or 120 knots) and stronger gusts.

This image shows both Hurricane Felicia as a strong Category 3 hurricane, left, and Tropical Storm Enrique, right. Felicia has a distinct eye surrounded by spiraling bands of clouds. Enrique, at this time a weakening tropical storm with winds near 85 kilometers per hour (50 miles per hour), is a small circular cluster of clouds.

Hurricane Felicia became a dangerous Category 4 hurricane as it tracked west across the Pacific Ocean in August 2009. 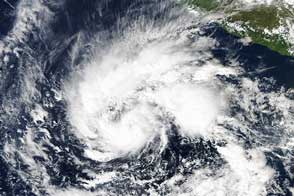 Hurricane Bill's spiraling clouds sprawl across hundreds of kilometers northeast of Puerto Rico in this image from August 20, 2009.