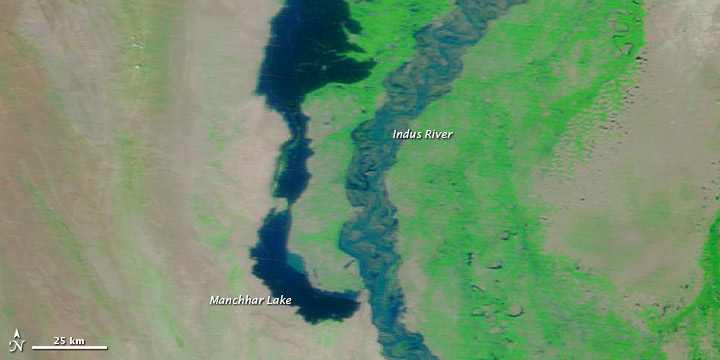 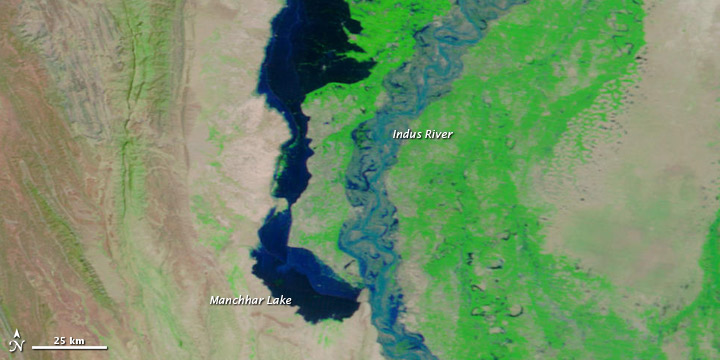 Water levels in Pakistan’s Manchhar Lake rose substantially over the course of one day in mid-September 2010. On September 17, the International Herald Tribune reported that the airport Sehwan, as well as at least 100 villages had been inundated after breaches developed in a levee at the lake. One breach was reportedly a kilometer wide. The same day, The Nation reported that floodwaters had washed away parts of the Indus Highway.

The Moderate Resolution Imaging Spectroradiometer (MODIS) on NASA’s Terra satellite observed the lake on September 16 (top), and September 17 (bottom). Both images use a combination of infrared and visible light to increase the contrast between water and land. Water ranges in color from electric blue to navy. Vegetation appears bright green. Bare land ranges from pink-beige to brick red.

In the image from September 17, 2010, Manchhar (also spelled Manchar) Lake had significantly grown on its northern side. The lake covers almost twice the area it did the day before, and swath of floodwater appears to extend from the swollen lake’s northeastern tip to the Indus River.

The rising waters in Manchhar Lake continued a pattern that began weeks earlier in the devastating monsoon season of 2010. Following a dam failure, the Indus River split, sending floodwaters over irrigated lands west of the river. The floodwater lake continued rising through early September.

Acquired September 16 and 17, these false-color images show a dramatic rise in water levels on Manchhar Lake over the course of a single day.