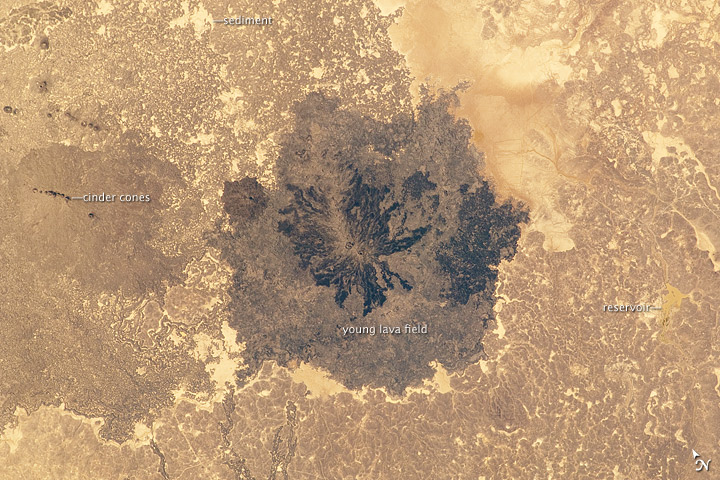 Es Safa is a striking basaltic volcanic field located to the southeast of Damascus, Syria. It lies within the larger Harrat Ash Shamah—the largest volcanic field on the Arabian tectonic plate. Harrat Ash Shamah parallels the Red Sea and extends from northeastern Israel, through southern Syria and Jordan, and into Saudi Arabia, covering an area of over 50,000 square kilometers (19,000 square miles).

Es Safa contains numerous vents that have been active during the Holocene Epoch (beginning approximately 12,000 years ago). The most recent recorded activity was a boiling lava lake observed in the area around 1850. The dark lava flow field (center) likely represents the latest activity of the volcanic field, and is emplaced over older, lighter colored flows. The older flow surfaces also have light tan sediment accumulating in shallow depressions, in contrast to the relatively pristine surfaces of the darker, younger flows.

Cinder cones are scattered throughout the Es Safa field, but many are aligned along northwest-southeast trends that likely indicate faults through which magma rose to the surface. Two such alignments are visible at image left. To the southeast (image right) a small reservoir feeds water distribution ditches extending northwards.

Astronaut photograph ISS024-E-13690 was acquired on September 4, 2010, with a Nikon D2Xs digital camera using a 180 mm lens, and is provided by the ISS Crew Earth Observations experiment and the Image Science & Analysis Laboratory, Johnson Space Center. The image was taken by the Expedition 24 crew. The image has been cropped and enhanced to improve contrast. Lens artifacts have been removed. The International Space Station Program supports the laboratory as part of the ISS National Lab to help astronauts take pictures of Earth that will be of the greatest value to scientists and the public, and to make those images freely available on the Internet. Additional images taken by astronauts and cosmonauts can be viewed at the NASA/JSC Gateway to Astronaut Photography of Earth. Caption by William L. Stefanov, NASA-JSC.