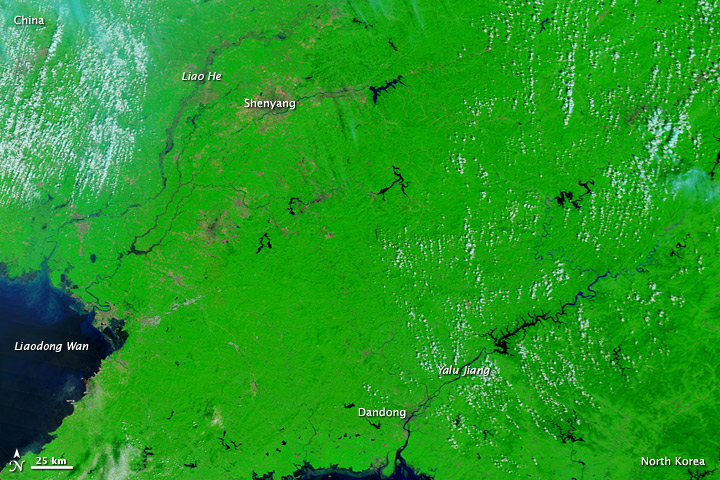 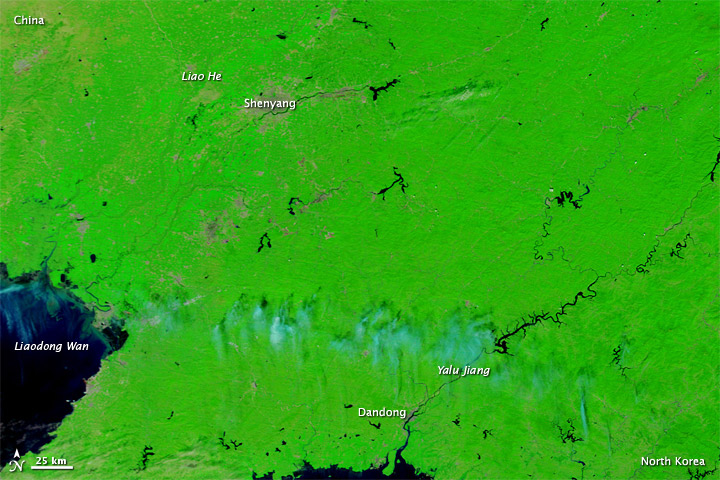 Flooding continued along the border between North Korea and China in late August 2010. On August 21, 2010, Voice of America reported that more than 127,000 people had been evacuated in northeastern China, and at least 5,100 people had been evacuated in North Korea. Regional flooding had caused at least 1,400 deaths since the beginning of the month.

The Moderate Resolution Imaging Spectroradiometer (MODIS) on NASA’s Terra satellite captured these images of the region around the North Korea-China border on August 18, 2010 (top), and August 21, 2009 (bottom). Both images use a combination of infrared and visible light to increase the contrast between water and land. Vegetated land appears in varying shades of green, water appears in varying shades of blue, and urbanized areas range in color from gray to red-brown. Clouds are light blue.

Compared to the image acquired a year before, the Yalu Jiang is noticeably thicker, and water appears backed up along many of the tributaries that feed it. Compared to 2009, the Liao He, which forms a large arc northwest of the city of Shenyang, appears dramatically higher in 2010, as do many of the nearby rivers. These rivers are barely discernible in 2009.

Weeks of torrential rains caused flooding and mudslides throughout China in July and August 2010.

Flooding along the China-North Korea Border

Acquired August 2, 2010 (top), and August 12, 2009 (bottom), these false-color images show flooding along the Yalu Jiang, on the border between China and North Korea.

Acquired on May 25, 2010 (top), and May 2, 2010 (bottom), these false-color images show part of Fujian Province before and after heavy rains caused widespread flooding.