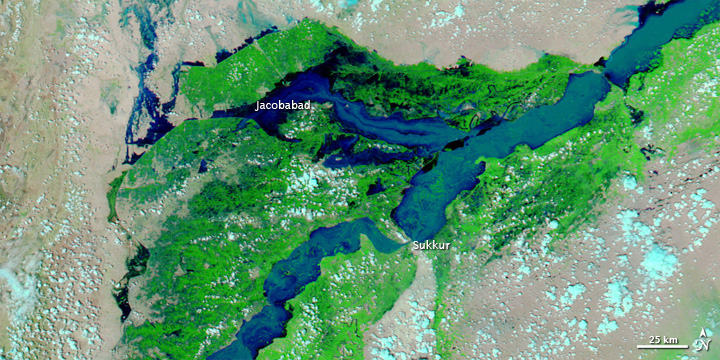 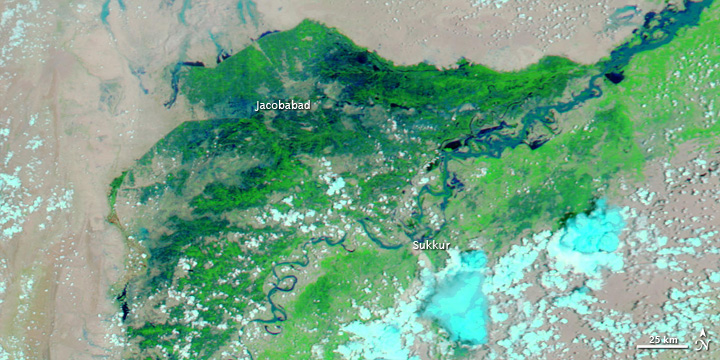 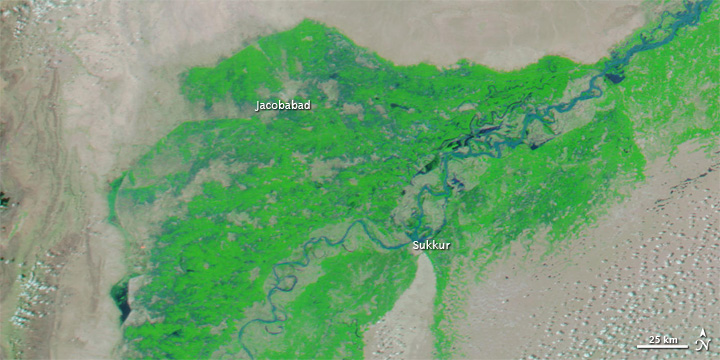 By mid-August 2010, some 20 million people in Pakistan had been affected by the intense monsoon rains, according to news reports. Roughly a fifth of the country was underwater, and extensive damage to agricultural lands was expected to lead to reduced food supplies even in relatively unaffected areas such as the coastal city of Karachi. Authorities worried that Pakistani farmers would miss the fall planting season, leading to a cycle of shortfalls the following year.

The Moderate Resolution Imaging Spectroradiometer (MODIS) on NASA’s Aqua satellite captured these images of the Indus River around the city of Jacobabad. The top image is from August 17, 2010. For comparison, the middle image shows the same region on July 30, 2010, just as the floodwaters were becoming visible to MODIS. The bottom image is from the previous year, August 18, 2009. All three images use a combination of infrared and visible light to increase the contrast between water and land. Water appears in varying shades of blue, vegetation is green, and bare ground is pinkish brown. Clouds are bright turquoise.

The image from July 30 shows monsoon flooding, and the image from August 17, 2010, shows much more dramatic flooding. The August 17 image shows the Indus River Valley after a flood surge from the northern part of the country moved south. A torrent rushes by the city of Jacobabad, and waters have swollen considerably around Sukkur, where a barrage modifies river flow. Besides the flooding, something else is apparent in this image. The agricultural fields northwest and west of Jacobabad have been demarcated by human structures; such straight, smooth lines do not occur in nature. Northwest of the agricultural fields, floodwaters stand on the land surface.

According to a report from National Geographic, farming practices may have exacerbated the severe flooding along the Indus River. Generations of modifications—canals, levees, and dams to manage floods and water fields—have reduced the Indus River’s ability to hold as much water as it used to during prolonged monsoon rains. In addition, the Indus carries significant amounts of silt, leaving less room for water.