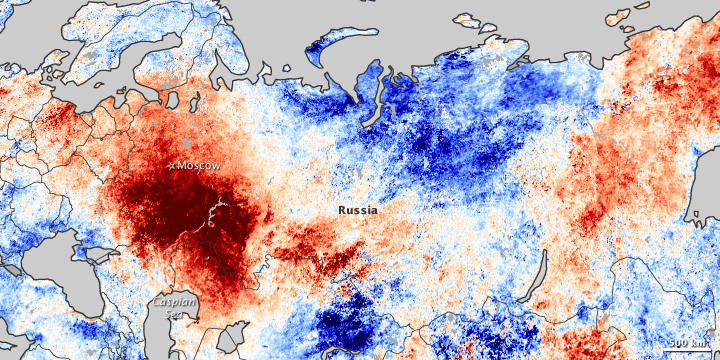 In the summer of 2010, the Russian Federation had to contend with multiple natural hazards: drought in the southern part of the country, and raging fires in western Russia and eastern Siberia. The events all occurred against the backdrop of unusual warmth. Bloomberg reported that temperatures in parts of the country soared to 42 degrees Celsius (108 degrees Fahrenheit), and the Wall Street Journal reported that fire- and drought-inducing heat was expected to continue until at least August 12.

Not all parts of the Russian Federation experienced unusual warmth on July 20–27, 2010. A large expanse of northern central Russia, for instance, exhibits below-average temperatures. Areas of atypical warmth, however, predominate in the east and west. Orange- and red-tinged areas extend from eastern Siberia toward the southwest, but the most obvious area of unusual warmth occurs north and northwest of the Caspian Sea. These warm areas in eastern and western Russia continue a pattern noticeable earlier in July, and correspond to areas of intense drought and wildfire activity.

Bloomberg reported that 558 active fires covering 179,596 hectares (693 square miles) were burning across the Russian Federation as of August 6, 2010. Voice of America reported that smoke from forest fires around the Russian capital forced flight restrictions at Moscow airports on August 6, just as health officials warned Moscow residents to take precautions against the smoke inhalation.

This map shows areas of above- and below-normal temperatures in Russia between July 20 and 27, 2010.