The Infant Island of Surtsey, Iceland 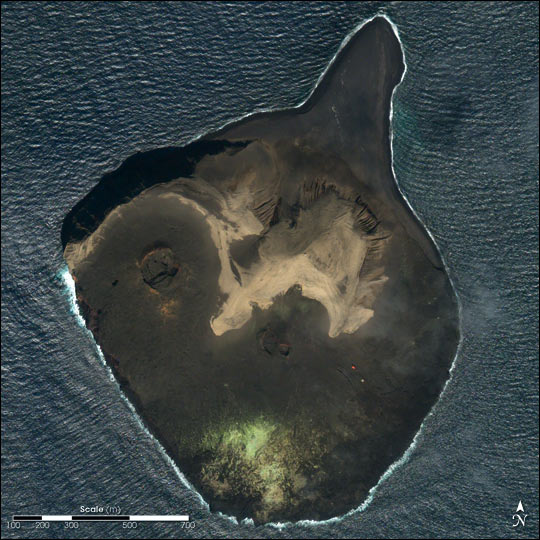 On November 14, 1963, an Icelandic fisherman noticed a plume of smoke rising from the open water. Within a day, Surtsey, a new volcanic island, had formed off the southern coast of Iceland. By 1965, plant life had colonized the relatively flat southern portion of the island, which is also visited by migratory birds and seals. The eruption lasted until 1967, forming an island with an area of 2.7 square kilometers (1.04 square miles). Since then waves, rain, and wind have partially eroded Surtsey, but the island is expected to last another 100 years.

NASA scientists monitor the erosion of Surtsey with instruments aboard aircraft and satellites. Since the eruption stopped in 1965, waves have eroded short cliffs along the southern coast. Gullies on the northern slopes of the two volcanic cones formed as rain washed debris down their slopes. This debris has created a peninsula of sand that extends to the north. Surtsey’s terrain is unstable—a single winter storm can dramatically alter the coastline.

This image was acquired on June 12, 2001, by Space Imaging’s IKONOS satellite. The data are archived by the NASA Scientific Data Purchase.